Based on reports of possible theft and drug use, police raided a home in a retirement community called The Villages in central Florida this month. Thanks to the assistance of a confidential informant who participated in three drug purchases, a SWAT team was authorized to search the premises. That raid resulted in the seizure of potentially stolen golf cart parts and drugs as well as five arrests.

This particular home has long been on police radar, the subject of frequent complaints by neighbors. Gary Brannen is a deputy for Sumter County. He said: “It’s been a problem location for the neighborhood up here for some time.”

So, what was the problem in this otherwise quiet senior living neighborhood? Law enforcement believes that the home was a center for drug deals and potentially a golf cart “chop shop” as well. An array of golf cart parts, including seat cushions, tires, and windshields, were found in the home during the raid. 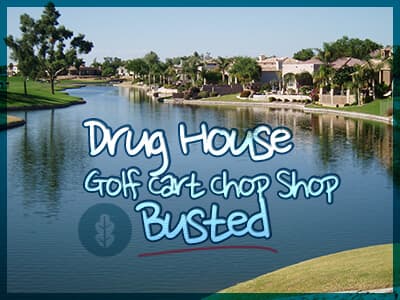 Seniors and Drug Use

The problem of senior adults and drug use is rampant yet rarely discussed. Too often, family members do not notice the changes that come with use and abuse of drugs, or if they do, they believe that those changes are normal and due to aging.

For many seniors, for example, alcohol use becomes a significant issue. They may drink as much or more than they did during most of their adult lives because they have more time on their hands or out of habit, not realizing that their bodies are changing in terms of how alcohol is processed. Seniors become more sensitive to the effects of alcohol as they age, making one drink far more potent than it once was.

Additionally, most seniors take medication to manage chronic ailments. Alcohol can render those medications ineffective or alter their effect, and the drugs may increase the potency of alcohol. In the case of painkillers, muscle relaxers, and sedatives, alcohol’s ability to cause intoxication amplifies exponentially, and in return, alcohol increases the potency of the drugs. This can cause a dangerous situation in which they are impaired to the point that falls and other accidents become a very real risk.

Family members who notice changes in the seniors in their family may believe that the signs of addiction are actually signs of dementia and/or normal aging. The fact is that unless there are other underlying issues or co-occurring disorders at play, the following are not normal:

If you notice any of these issues occurring with someone you love, accompany them to the doctor for their next visit and ask questions.

In this particular case, it should be noted that it was not the senior resident who was responsible for the criminal behavior. The resident of the home is reportedly sick, and neighbors report that the suspicious activity began when a 43-year-old family member moved in with the resident, bringing others with her.

It is not uncommon for someone living with an active addiction to take advantage of other family members, and when seniors become unable to care for themselves, they can become targets. It is important for the entire family to maintain a watchful eye when it comes to aging family members. The more people who are paying attention and involved, the more likely it is that issues with substance abuse, accidental or otherwise, can be caught early and addressed.

Taking the Next Step

When substance abuse is not due to a misunderstanding regarding how to safely use prescription medication – and sometimes, even when it is – it can be difficult to convince a loved one to make the changes to be healthy. However, there is no such thing as “too late” and engaging in treatment services at any age can improve quality of life as well as increase longevity. Working together with your loved one’s healthcare team can make it easier to have a productive discussion with your family member and empower them to make choices that will translate into positive change.

Is someone in your family in need of your time and attention?