Proactively addressing the opiate epidemic is an expensive proposition, and many cities and counties are looking for someone to foot the bill. Miami is joining a number of local governments across the country in seeking financial respite from the organizations they believe are responsible for the high rates of opiate addiction and overdose – the pharmaceutical companies – by filing suit. 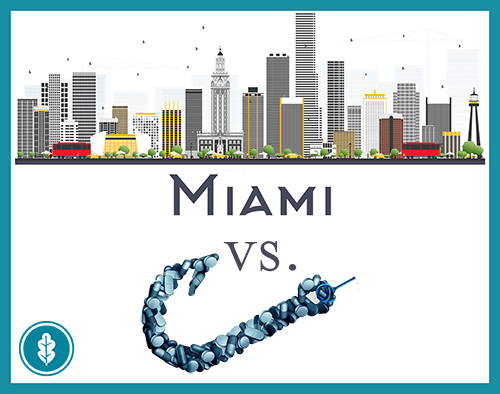 According to the civil lawsuit filed in Miami-Dade County earlier this month, city government officials are claiming that the companies that produce and distribute opioid drugs (e.g., oxycodone, hydrocodone) engaged in deceitful marketing practices with high sales as their priority rather than the safety of consumers, with devastating results. They claim that these practices are responsible not only for the number of lives lost in Miami and across the country to opioid overdose and addiction but also for the high costs incurred by local governments and healthcare systems as rates of addiction exploded.

Said Miami City Manager Emilio González: “We believe the pharmaceutical industry knowingly inflicted a great burden on the people of the city of Miami and our nation.”

Miami officials are far from alone in their assertion that pharmaceutical companies are largely to blame for the crisis we currently find ourselves in. About 250 states, counties, and cities have sued companies positioned at every point of the production and distribution process, from manufacturers to marketers and all the wholesalers and distributors in between, for falsely advertising the deadly substances as safe and addiction-free. Even Florida Attorney General Pam Bondi has stated that she is prepared to go to court if certain companies do not negotiate a reasonable settlement.

Not everyone believes that the cases springing up across the country are well founded, however. Companies that are targeted by the litigation are calling for a halt to new claims until more research can be done about the long-term effects of opioid use. They do not believe that we have enough evidence at this point to effectively determine blame. They contend that a decade of continually skyrocketing rates of overdose deaths caused by opiates and an overwhelming demand for opiate addiction treatment from people who started their use of the drug in the doctor’s office is not enough to determine blame.

We believe the pharmaceutical industry knowingly inflicted a great burden on the people of the city of Miami and our nation.

Purdue Pharma is the company behind OxyContin, a potent opiate painkiller that was once prescribed easily in doctors’ offices across the country for any level of pain. They are the lead defendant in the lawsuit filed by Miami officials. Bob Josephson is their spokesperson.

Josephson contends that the company is working on finding solutions to the opioid crisis and says: “We must balance patient access to FDA-approved medicines with collaborative efforts to solve this public health challenge. Although our products account for less than 2 percent of the total opioid prescriptions, as a company, we’ve distributed the CDC Guideline for Prescribing Opioids for Chronic Pain, developed three of the first four FDA-approved opioid medications with abuse-deterrent properties and partner with law enforcement to ensure access to naloxone.”

The fact that the companies who are allegedly responsible for the opioid addiction crisis in the first place are now producing more medications that are highly profitable to treat the problem does little to ease the burden of responsibility in the eyes of those filing suit.

In order to more quickly get a settlement that will benefit the city of Miami, officials are currently opting out of joining the massive opioid lawsuit that has been consolidated at a federal court in Cleveland, Ohio. Rather than get tied up in an enormous case with hundreds of other cities, states, and counties, Miami officials are hoping for a settlement that is more lucrative to the city by staying in the Florida courts.

The lawsuit identifies 17 companies that Miami officials believe are responsible for their problem and hopes that the judge will order these companies to stop all marketing practices that falsely advertise that opioid drugs are nonaddictive, reimburse the city for the financial costs incurred due to opioid epidemic in Miami, and create a program that will help Miami residents currently living with an active opiate addiction to safely and effectively get off drugs.

With the billions that these companies made in profit, Miami officials reason that they are responsible for paying for the damage they caused.

What do you think? Is the pharmaceutical industry responsible for the costs of addiction?