Student Homelessness in the U.S.: How Do Cities Compare?

Homeless individuals are a vulnerable population, going without consistent housing, food, or life stability. The U.S. Department of Housing and Urban Development estimated that 553,742 people went without a home on a single night in 2017. The exact number is impossible to calculate exactly, since these individuals often are in flux between different types of non-permanent housing situations, but it’s a significant problem across the U.S. nonetheless.

Within this population are homeless students who have the added challenge of trying to regularly attend school while going without a consistent place to live — not to mention these individuals are generally under the age of 18. Plus, it’s estimated that homeless youth are two to three times more likely to abuse substances than those who aren’t homeless.

Public school districts collect information about their student population, and the U.S. Department of Education makes this available. We decided to take a closer look at these numbers to see how cities across the U.S. compare when it comes to student homelessness. Our analysis includes the 100 largest cities, according to metropolitan area population size. We also found the three school districts in each state that have the highest count of students in this category.

The Cities with the Most and Least Homeless Students by Population 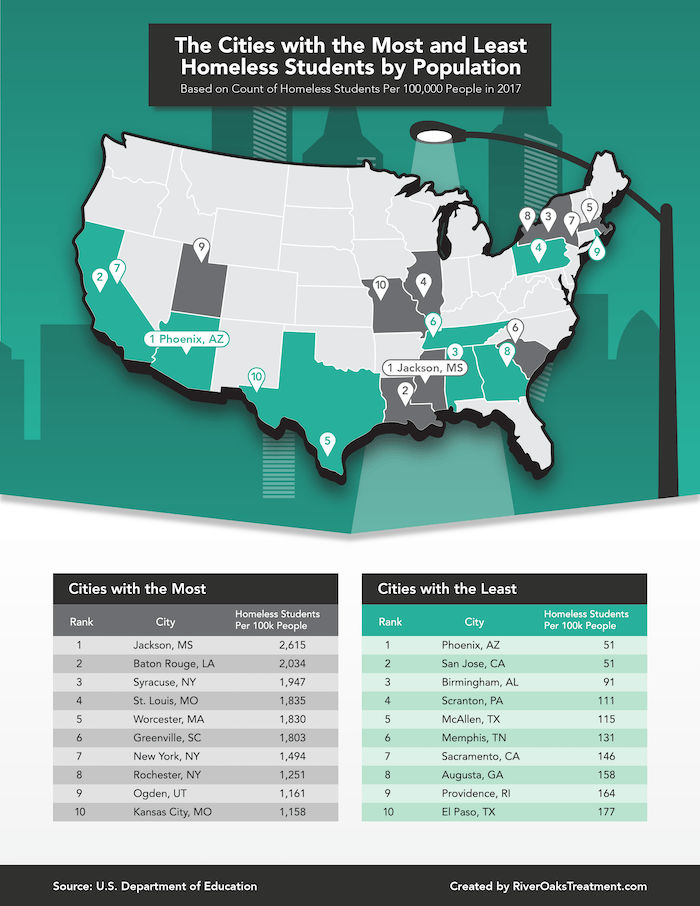 First, we looked at the count of homeless students in each city’s school district, per 100,000 people in the local population. We found that although large cities have a much higher count, such as New York, NY, there are smaller cities that have a more significant problem when looking at the numbers compared to population size. The three cities with the largest population of homeless students are Jackson, MS (2,615 per 100,000), Baton Rouge, LA (2,034), and Syracuse, NY (1,947). Those with the smallest are Phoenix, AZ (51), San Jose, CA (51), and Birmingham, AL (91).

By Region: The Cities with the Most and Least Homeless Students by Population 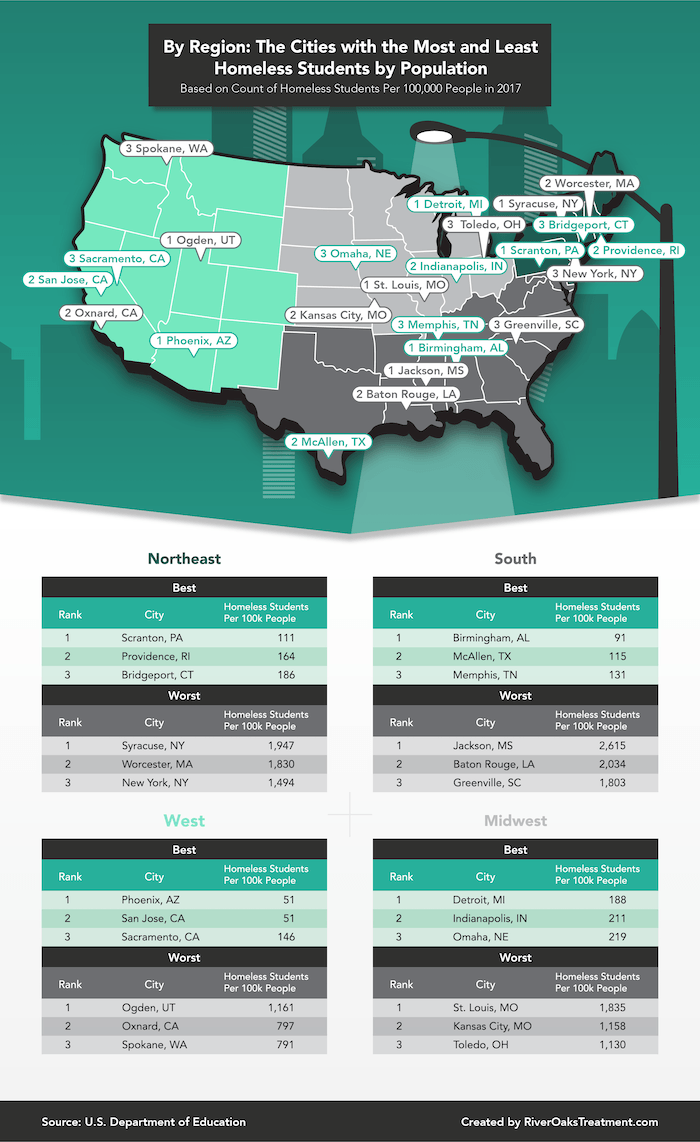 Since states in the same region can show similarities, while states in different one can face significantly different circumstances, we also wanted to see how cities compare within each region. Our results show how each section of the U.S. differs, with the ‘best’ cities the Midwest showing much less favorable figures than the ‘best’ cities in the South and West. Interestingly, two of the ‘worst’ cities in the Midwest and in the Northeast are located in the same state — Missouri and New York, respectively.

Student Homelessness: How Do the Largest U.S. Cities Compare? 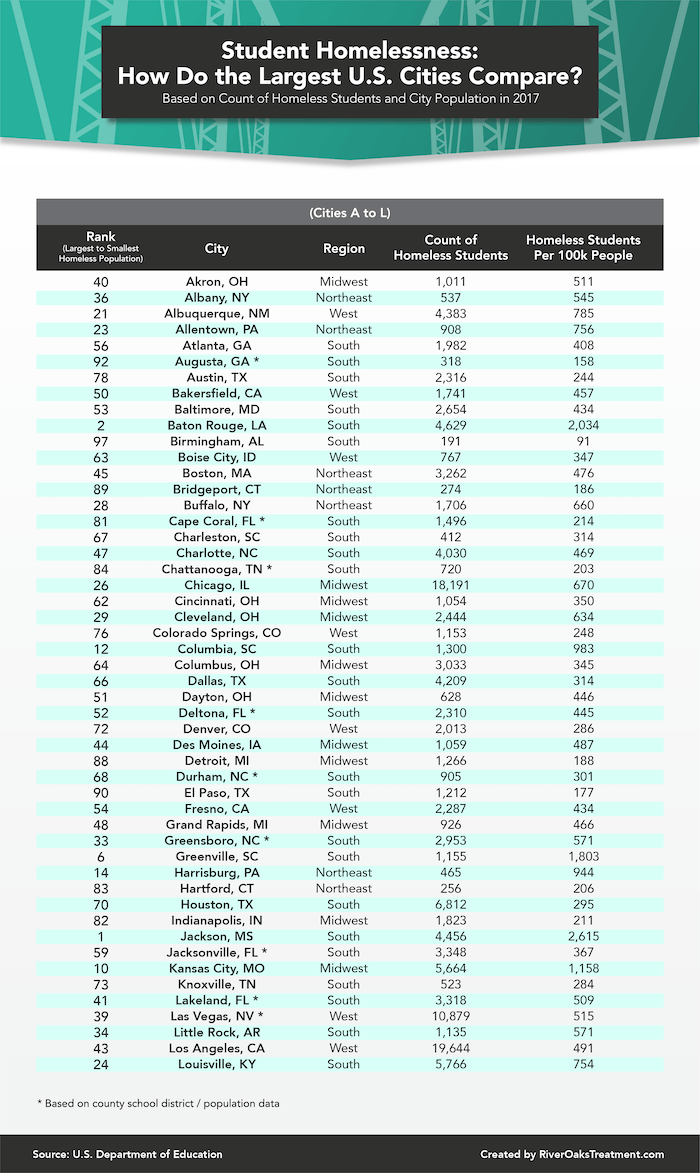 Next, we wanted to show how all 100 cities stack up, since it’s important to see how all areas compare even if they aren’t the ‘best’ or ‘worst.’ Our table (cities A-L, above) shows the count of homeless students as well as the number per 100,000 people. It shows how some places, like Las Vegas, NV, have a relatively large raw count that ultimately balances with it’s larger overall population. In a place like Greenville, SC, however, the number of homeless students is significant compared to the number of people in the city’s overall population. 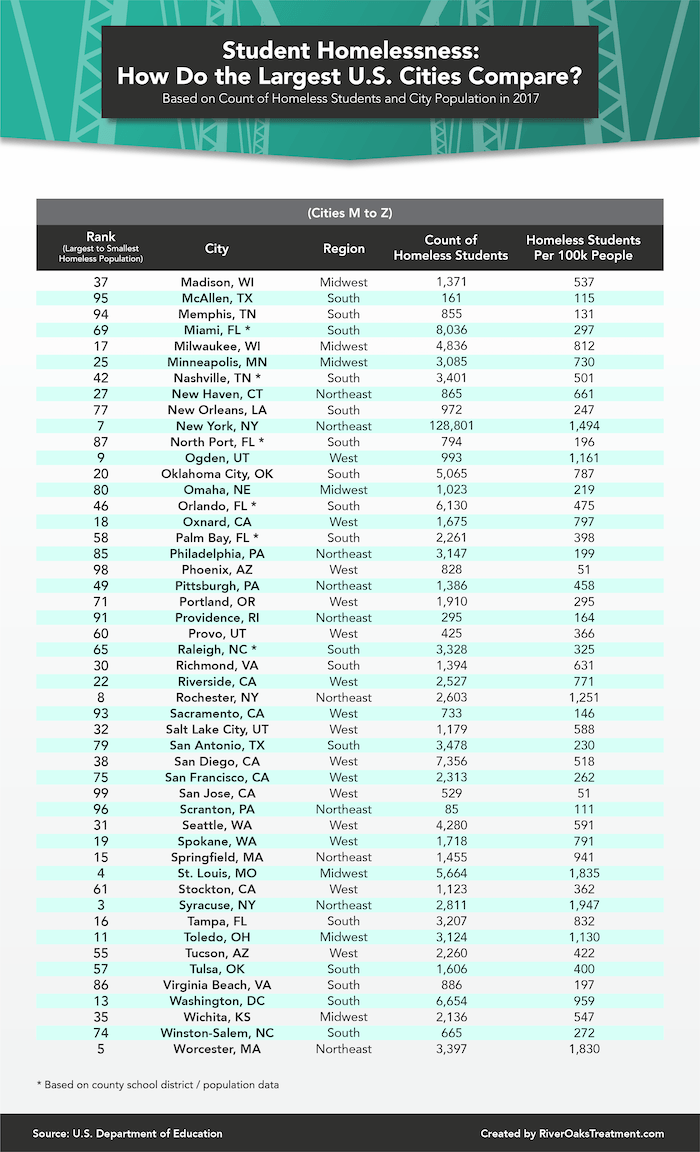 On our second table (cities M-Z, above), one can see how large the number of homeless students is in New York, NY, though it comes along with a significantly larger overall population — after all, it’s the most populous city in the entire nation. One general trend we noticed is that cities in the West and South tend to have more positive figures when it comes to student homelessness, while those in the Midwest and Northeast tend to show more problematic numbers.

By State: The School Districts with the Highest Count of Homeless Students 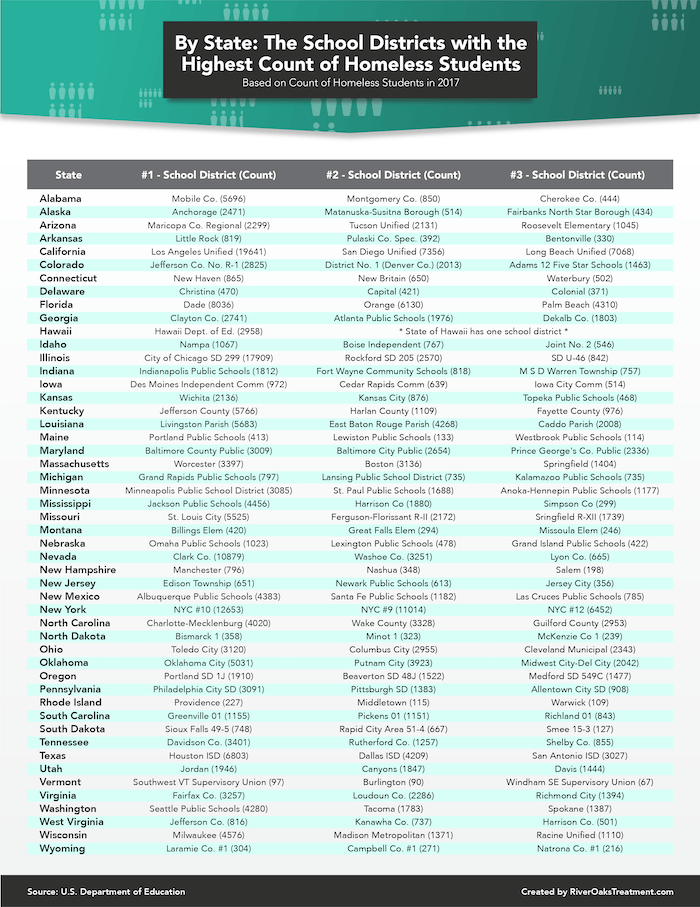 Finally, we took at look at the numbers for each state overall. We found the three public school districts with the highest count of homeless students in each one. These figures are not adjusted by population, but they do illustrate which areas within each state generally need more support when it comes to student homelessness.

These figures from our study are troubling, but ultimately the first step towards progress is impartial evaluation of the current circumstances. In our treatment facility in Florida, we take this type of judgement-free approach to the care we provide to our clients. If you or someone you know is struggling with a drug- or alcohol-related disorder us, learn more about how we can help today.