Trump and the Biggest Drug Bust in Hernando County History

What do Donald Trump, Pablo Escobar, and El Chapo all have in common? Each had the dubious honor of having their faces or names plastered on wax paper envelopes containing individual doses of heroin that were seized in the largest drug bust in the history of Hernando County last month.

Apparently, Florida Attorney General Pam Bondi was not amused by seeing POTUS 45’s face on the packages of heroin. She said: “All I want to say to this drug dealer is, ‘Big mistake by putting the president’s picture on this.’ Big mistake. Because he is going to be our most fierce advocate in taking this junk off of our streets. Can you believe this? Big mistake.”

In total, there were more than 5,500 wax paper envelopes of heroin seized in the bust at the end of last month, and the man allegedly responsible for transporting the shipment was arrested for possession and sale of heroin, heroin trafficking, unlawful use of a communication device, possession of cocaine with intent to distribute, and driving with a suspended license. The projected sentence, if convicted, will add up to 15-25 years of prison time. 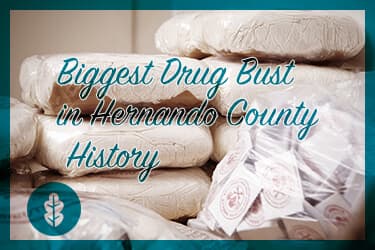 The hope is that by removing this much heroin from the streets of Hernando County there will be fewer new cases of addiction. For example, if just 1 percent of the doses would have ultimately ended up in the hands of a first-time heroin user, that would add up to more than 50 people who could potentially develop a heroin addiction.

The number of total overdoses avoided as a result of removing the drugs from the street is difficult to count, but it is likely high as well, depending on the potency and whether or not the packages were laced with fentanyl.

Being Proactive: Prevention and Awareness

One of the primary issues driving inadvertent overdoses and the development of an addiction to drugs like heroin is a lack of understanding among the general public and young people, especially of just how dangerous use of the drug can be. Many believe that as long as the drug is not injected then it is relatively safe for use, but this is not the case. Though there is a growing trend among heroin users to smoke the drug rather than inject it because it is so potent and can create a strong high with this manner of ingestion, the fact is that smoking heroin can be just as deadly as any other form of ingestion.

Some of the risks associated with even casual use of heroin, no matter what the method of ingestion is, include:

Avoiding use of heroin is the best way to manage these effects and ensure that they do not strike you or someone you love.

If you, or someone you care about, are already struggling due to heroin use – whether the problem has just begun or has been a growing problem for years – the best way to respond is immediately and proactively. Unfortunately, it is almost never possible for someone who is physically and psychologically addicted to any opiate drug, including heroin, to suddenly stop using the drug and remain sober. Professional and comprehensive treatment is necessary to ensure that all drug use is stopped safely and that the individual has the support and guidance necessary to make positive and healthful choices going forward.

What does your family need to overcome a heroin problem?