Would a Wall Change the Amounts of Drugs Sold on Florida Streets?

Whether or not there should be a wall along the Mexico/United States border has been an on-again, off-again topic of national debate for decades. The President-Elect again brought the conversation into the foreground as a part of his campaign platform, and many Americans believe deeply that creating a physical barrier between the two countries would help to limit the amounts of illegal drugs that come into the United States as well as stop would-be drug dealers from other countries from taking up residence in this country and selling their wares to Americans.

It is an idea that Sheriff Grady Judd of Polk County supports. He took part in a major drug bust that was the culmination of a two-month investigation called “Operation Numero Dos.” Yielding six arrests and a seizure of almost seven pounds of methamphetamine (ICE), five guns, and about $39,000 in cash, some of the people arrested had been arrested previously in the United States, served a brief sentence for trafficking, and then deported. One arrestee had a long track record of drug violations in the US and was deported in 2010 after being convicted in 2009. 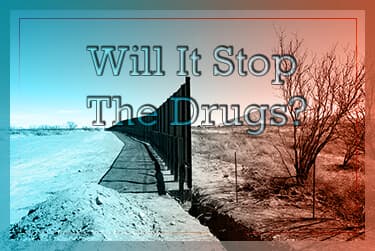 Sheriff Grady blames the fact that the last administration deported the man almost immediately after finding him guilty for the fact that he was so quickly back in the country and selling dangerous drugs. He believes that the President-Elect, who has said that he will deport convicted drug traffickers who are not legal residents of the United States after they complete their sentences, is on the right track.

Some say that the border wall that the President-Elect promises to build will stop deported, convicted drug traffickers from returning to the US and continuing to cause harm. But others believe that the time and resources spent to build a wall and manage it would be better spent on providing the people who are convicted of drug-related offenses, no matter their country of origin, with treatment that will help them heal. What do you think?

The Failed War on Drugs

We know from recent history that staging a “war” on drugs does little to positively impact the problem. In fact, it tends to drain our resources, overwhelm the prison system, create unsafe conditions for all involved, and create more problems down the road without diminishing the toll taken by ongoing drug use and addiction.

On the other hand, we have also learned in recent years that responding with positive assistance – that is, recognizing that addiction is a chronic disease as opposed to a criminal offense and treating it as such with medical and therapeutic treatment – has been of immense help. People are able to turn their lives around, become a positive part of their community once again, and repair some of the damage done during active addiction, not just to themselves but to everyone around them.

In many people’s opinions, the issues of drug smuggling and stopping drug dealers from entering the country are not justifications for building a wall. They contend that both drugs and immigrants come in via plane and boat – even tunnel – and that the wall will do very little to stop the revolving door that is the justice system’s management of people from other countries who get into trouble with drugs here in the US. Instead, they believe that providing people – no matter their country of origin – with treatment is the better option. Investing in the health of people who are struggling not only benefits them but also their family members who depend on them on both sides of the border and the communities they live in as well.

With more than $1 billion slated for use in the fight against opiate addiction in the federal budget, do you think there is need for a wall? Would installing a wall at the border of Mexico and the United States serve to stop illegal immigration and drug smuggling? Will heightened border security impact the amounts of drugs available on the street and rates of death due to drug overdose and addiction? What do you think?