How to Successfully ‘Taper Off’ Suboxone (+ Timeline)

According to the National Institute on Drug Abuse (NIDA), there were around 2.5 million Americans struggling with opioid addiction and abuse in 2014. The Centers for Disease Control and Prevention (CDC) reports that, in more recent years, as many as 115 people die every day from opioid overdoses in the US.

With so many people suffering from opioid abuse, overdose, and death, effective treatments are necessary to save lives. Methadone was the leading treatment for decades, primarily focused on long-term tapering for people who struggled with heroin addiction; however, with the most recent epidemic of narcotics abuse, the Food and Drug Administration (FDA) approved new treatments, including buprenorphine in 2002, which is a partial opioid agonist. 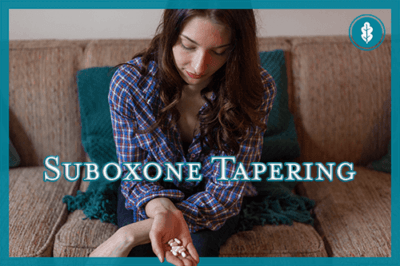 When managed by a medical professional, detoxing slowly with a scheduled Suboxone taper works very well for many people. Methadone must be managed by methadone clinics while Suboxone can be prescribed for outpatient treatment, which is a deeply important flexibility people struggling with opioid abuse have never had in the US before.

Some reports show that Suboxone abuse is on the rise in the US, but it primarily occurs among people who have not abused other opioid drugs before. People who are opioid-naïve are more likely to get high from partial opioid agonists compared to those who have struggled for a long time with an addiction to opioid drugs. Suboxone is sometimes diverted for illicit sale, purchased for nonmedical reasons through the Internet, or illicit versions are occasionally sold on the black market; however, this medication is a vast improvement on past opioid addiction treatments. This is because many people who try to quit opioid drugs and experience moderate or severe withdrawal symptoms are at great risk of relapsing back into opioid abuse, which increases their risk of overdosing on these drugs. If someone taking Suboxone attempts to abuse an opioid drug like Vicodin, OxyContin, or even heroin, that opioid will not bind to the opioid receptors; instead, naloxone will prevent it from causing intoxication.

Surveys of other countries, including Australia, Finland, and France, show that, since the 1980s, buprenorphine abuse has been consistently recorded among those who receive the drug to taper off other opioid abuse.

How Do Medication-Assisted Treatments (MATs) Work?

Both buprenorphine and methadone attach to the opioid receptors in the brain similarly to narcotic drugs; however, unlike heroin, oxycodone, or fentanyl, neither methadone nor buprenorphine will cause a high in someone who is physically used to abusing opiate drugs. In fact, buprenorphine is so effective at reducing withdrawal symptoms while preventing intoxication that it has become the preferred treatment among most physicians and addiction specialists in the US. It is also approved for prescription as a form of outpatient withdrawal management, making it one of the first opioid tapering drugs to help people who can safely live at home.

To ensure that buprenorphine is a safe approach to easing withdrawal symptoms, tapering the person off opioids until they are no longer physically dependent and avoiding intoxication that may trigger relapse, this partial opioid agonist has been combined with naloxone to create Suboxone, a very popular brand name medication-assisted treatment (MAT). Naloxone is a drug that stops opioid drugs from binding to opioid receptors in the brain. Alone, naloxone is used to temporarily stop opioid overdoses so the person can get emergency medical treatment, but when combined with buprenorphine, it becomes an abuse deterrent. If someone who is prescribed Suboxone takes it as prescribed, they will receive relief from uncomfortable withdrawal symptoms; if they abuse the drug to get high, naloxone acts before buprenorphine, preventing the medication from treating any withdrawal symptoms.

This suggests that a shorter taper may be appropriate for more people than long-term tapering; however, taking Suboxone as prescribed for longer than one week may be an important approach for people who have struggled with opioid addiction for a long time.

A 2009 study examined two tapering schedules to understand whether short-term or long-term treatment would work best for the most people. It is important to know, no matter the results of the study, an addiction specialist will create an individual tapering plan based on medical guidelines, so they will focus on each client’s needs rather than one specific approach.

At the end of the study, 44 percent of the group tapering for seven days (one week) had completely ended their physical dependence on narcotics. In comparison, 30 percent of the 28-day (roughly one month) group had managed the same. At the one-month and three-month follow-up points, there were no differences between the two groups.

How Suboxone Tapers Are Created

Before prescribing Suboxone and a tapering schedule for the medication, a physician will use at least one of several opioid withdrawal measurement surveys.

Some of these include:

These will be used alongside urine tests to measure how much opioid remains in the body and whether the individual has relapsed back into opioid abuse.

Opioid withdrawal can take one to two weeks, depending on which narcotic was abused. Drugs like hydrocodone or heroin may be associated with uncomfortable withdrawal symptoms, but these fade after a week. Methadone, however, is a long-lasting opioid agonist, and it may take longer to leave the body.

Cravings and mood swings are part of both phases, and these withdrawal symptoms are likely to remain after the physical symptoms have dissipated. Using Suboxone during this process may extend the amount of time it takes for withdrawal to go away – in many people, these symptoms may clear up in five days or less – but it means that the physical discomfort and psychological stress are both managed. Going “cold turkey” is much more likely to lead to relapse than opting for MAT.

The American Society of Addiction Medicine (ASAM) released a guide for clinicians to manage opioid withdrawal, including a section on buprenorphine treatment. The guide recommends starting with a lower dose of buprenorphine compared to the equivalent of methadone, usually 2-4 mg. However, after the introduction of buprenorphine management, the dose can be upped to 8 mg per day with potential daily doses as high as 16 mg. The FDA recommends no more than 24 mg per day, and this amount is rarely prescribed. ASAM states that there is no limit to the amount of time buprenorphine tapering is safe, and if the individual switches medications (e.g., plans to move to naltrexone as a maintenance drug to reduce cravings during rehabilitation), they must spend at least 7-14 days off any medication treatment before switching.

It typically takes two or three days for the person taking this medication to feel stable. Although the taper may be one week long, there may be another week during which the body adjusts to the medication before tapering can begin.

New approaches to MAT are being developed all the time. In fact, NIDA reports that in November 2017, the FDA approved Sublocade, a once-per-month buprenorphine injection to ease withdrawal symptoms. Instead of taking drugs once or twice per day, behavioral changes can begin as soon as detox treatment begins. The individual taking Sublocade will no longer have any substances on hand that they might be tempted to abuse to get high. While this treatment is not widely used, it shows that medical researchers understand the effectiveness of buprenorphine combinations to manage opioid withdrawal symptoms and are developing better treatments for addiction.

matopiatesuboxone
Prefer getting help via text?
We're available 24/7 via text message. Signup below for access to our team when its convenient for you!
and many more...
✕
Instantly Check Your Insurance Coverage
Your information is safe & secure
At River Oaks, we accept most types of private (non-government) insurance and offer a variety of payment options.
You can quickly and privately check your insurance benefits to see if you're covered for addiction treatment services. We’ll be able to tell you if your provider is in network with River Oaks Treatment Center and all American Addiction Centers locations.
This means your treatment may be FREE1 depending on your policy, copay, and deductible.
Get Help & ResourcesLearn aboutaddiction recovery at River Oaks.