Getting Help for Alcohol Abuse and Addiction

Unlike many intoxicating substances, such as cocaine, heroin, or ecstasy, alcohol is part of daily life for millions of Americans. Whether or not a person actually drinks alcohol, or drinks destructively, the person will probably be exposed to alcohol at parties, holiday activities, and social events. Alcohol appears constantly in the media in TV commercials, feature films, magazine ads, and sitcoms.

The widespread availability and social acceptance of alcohol, in fact, are two of the reasons that alcoholism is one of the most common forms of substance abuse.

Once an individual crosses the line from casual or recreational drinking to problem drinking and alcohol addiction, alcohol use can quickly become destructive. Alcoholism is considered to be a chronic disease that grows progressively worse over time without treatment. While alcoholism cannot be cured, an individual who abuses alcohol can recover with treatment and lead a healthier, more rewarding life in sobriety.

What Is Alcohol Abuse?

Alcohol abuse is defined as a consistent pattern of drinking that causes a negative impact on the individual’s health, job or school performance, or relationships. Although the harmful effects of the user’s drinking may be obvious to everyone, including the individual, compulsive drinking continues. At this point, the user has little or no control over how much alcohol is consumed. If left untreated, alcohol abuse almost always becomes worse, eventually leading to medical problems, disability, and serious deterioration in quality of life.

How Common Is Alcohol Abuse?

Alcoholism is one of the leading preventable causes of disease, disability, and premature death in the US, yet alcohol consumption and alcohol abuse are still very common in this country. The Substance Abuse and Mental Health Services Administration states that according to 2013 statistics:

A large percentage of people in this country drink alcohol without suffering any health problems as a result. When consumed in moderation (approximately one drink per day for women and two drinks per day for men, according to the 2010 Dietary Guidelines for Americans), alcohol can even have certain health benefits, such as a decreased risk of high cholesterol, heart disease, and stroke. Drinking more than this amount, however, can increase the risk of alcohol-related disease, injury, and death. Unfortunately, out of those individuals who need help for alcohol abuse or addiction, only around 10% actually receive specialized treatment, according to national statistics.

How Alcohol Affects the Brain and Body 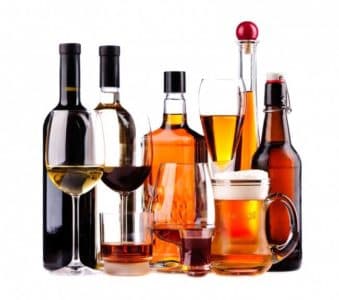 After the first alcoholic beverage or two, many people report feeling more energized, uninhibited, or even giddy. These pleasant sensations are caused by alcohol’s release of endorphins, or natural opioids, in the brain that generate feelings of well being or euphoria. After alcohol is ingested and enters the bloodstream, a certain amount of this substance is broken down and metabolized by the liver. The remainder of the alcohol goes to the brain, where it acts as a depressant. As drinking continues, the user’s mental functions slow down, speech becomes slurred, and motor coordination gives way to clumsiness. Because alcohol affects the regions of the brain that control judgment, reasoning, memory, and movement, a heavy drinker can easily become uninhibited, forgetful, and ready to take dangerous risks.

The effects of alcohol on judgment, motor coordination, and nerve activity are mainly to blame for the large number of alcohol-related motor vehicle accidents and fatalities. According to the National Highway Traffic Safety Administration, alcohol-impaired driving was associated with over 10,000 traffic fatalities in 2013, or an average of one death every 52 minutes that year. Alcohol intoxication greatly increases the risk of accidental injuries, disability, violent crime, and premature death.

In addition to the acute risks of heavy drinking, alcohol abuse is one of the top factors contributing to disease in the US. Heavy alcohol use has been associated with the following chronic health problems:

Alcohol has a destructive effect on the brain as well as the body, causing neurological and cognitive problems such as memory loss, confusion, dementia, and seizure disorders. Although heavy alcohol use is not generally considered to be a cause of mental illness, heavy drinking can worsen or trigger the symptoms of psychiatric disorders like depression, anxiety, bipolar disorder, and schizophrenia. The National Alliance on Mental Illness notes that in individuals with mental illness, alcohol abuse significantly increases the risk of noncompliance with treatment, hospitalization, impulsive behavior, violence, and suicide attempts.

The medical community still does not know exactly why some people develop alcoholism, while others are able to drink socially without ever exceeding a healthy limit of alcohol. Yet certain risk factors have been identified that contribute to an individual’s chances of developing substance abuse:

Like other forms of addiction, alcoholism evolves in stages. Alcohol abuse almost always begins with casual or recreational drinking, in which the individual drinks to enjoy the pleasurable aspects of alcohol in the company of other people. At this stage, the individual can control how much is consumed and rarely feels compelled to seek out alcohol at inappropriate times. The majority of people who drink will never go beyond the casual drinking stage.

Heavy drinking and binge drinking can lead to increased tolerance for alcohol, or the physiological need for more of this substance to get the desired effects. As an individual continues to drink heavily, the person will begin to consume more beverages at any given event or keep drinking after others have stopped. Although the person may still have some control over how much alcohol is consumed, the person will drink to excess more often and may have a harder time quitting. The individual may realize at this point that drinking is a problem; however, the person will probably not actively seek help at this stage.

Identifying the Warning Signs of Alcoholism

Alcoholism consistently proves to be one of the most common substance use disorders in the country. The Substance Abuse and Mental Health Services Administration reports that in 2013, over 16.6 million Americans had an alcohol use disorder; by comparison, only 5.9 million were addicted to illicit drugs like heroin, cocaine, marijuana, or meth. In addition to the loss of control over drinking, the following characteristics distinguish alcohol addiction, or alcoholism, from heavy drinking:

Many individuals who abuse alcohol will deny the problem if they are confronted by loved ones. If they do admit to having a problem and attempt to quit on their own, it is likely that they will relapse. Relapse is one of the primary symptoms of alcoholism, and it should not be viewed as a sign of weak willpower or a lack of desire to get sober. Instead, the individual should be encouraged to seek treatment through a structured, supportive rehab program that provides the resources necessary to achieve long-term abstinence.

How to Treat Alcohol Abuse

In the treatment of alcohol addiction, it is especially important that the individual be medically monitored during the detox phase. While some of the symptoms of withdrawal are merely uncomfortable — such as shaking, irritability, insomnia, nausea, and sweating — others pose acute risk to the individual’s health. These symptoms, which may start as soon as six hours after the person stops drinking, develop as the brain attempts to adjust to the absence of the sedating effects of alcohol. Seizures may occur in some individuals within 12 hours to two days.

Heavy, long-term drinkers who stop using alcohol abruptly can develop a condition called delirium tremens, or DTs. Although delirium tremens is uncommon — affecting only about 5 percent of drinkers, according to the National Library of Medicine — its symptoms can be life-threatening if they are not detected and treated immediately. Symptoms include:

During alcohol detox, the patient is monitored carefully for changes in vital signs or level of consciousness that may point to a serious reaction to alcohol withdrawal. At the same time, the client can receive medical treatment for some of the side effects of alcoholism, such as dehydration, electrolyte imbalances, and malnutrition. After the initial detox period, anti-alcoholism medications, such as naltrexone (ReVia, Vivitrol), acamprosate (Campral), or disulfiram (Antabuse) may be prescribed to help reduce the intensity of alcohol cravings, blunt the pleasurable effects of alcohol, and prevent relapse.

Once the patient is stable, they are encouraged to transition to the next phase of rehab, which may include:

Persuading a loved one that help is needed for alcohol abuse can be challenging; however, the risks of continued alcohol abuse are so severe that it is well worth the effort to intervene in problem drinking. With clinical monitoring and professional support, it is possible for an individual to detox safely and continue through the stages of recovery to achieve a healthier, more satisfying life.

There are a variety of options available for treatment of alcoholism. We are available 24/7 to help you figure out the best course of action for you or your loved one. Give us a call anytime at .