Coming from a tree native to Southeast Asia and related to the coffee plant called Mitragyna speciosa, kratom is a mind-altering substance that has stimulant effects at low doses and opioid-like effects at higher doses. Use of this plant-based substance likely originated in Southeast Asia where individuals would ingest the leaves to improve their work productivity, medicate pain and other medical ailments, in religious ceremonies, and as a substitute for illicit opioid drugs, the journal Biomed Research International publishes. The leaves of the plant are often chewed or brewed into a beverage like tea and ingested. The leaves may also be pressed into pellets or placed into gel capsules.

recreational drug of abuse, often sold as an “herbal supplement” or in packaging labeled “not for human consumption” in head shops. Some bars may even sell drinks infused with kratom. More commonly distributed and marketed over the Internet, people commonly use drug forums to discuss methods and results of kratom abuse online.

Previously marketed as a “dietary supplement,” in 2014, the US Food and Drug Administration (FDA) banned kratom import due to its potentially hazardous consequences when used. In Thailand, where kratom use has been traditionally widespread especially among adolescents in a concoction called 4×100 (a narcotic drink containing both kratom and cough syrup), kratom has been deemed an illegal drug, NBC News reports. In August 2016, the DEA (Drug Enforcement Administration) published a “notice of intent” to classify kratom as a Schedule I controlled substance, in the same category as heroin and cocaine, but since has withdrawn this notice until further review and research into the substance can be performed, the Federal Register publishes.

Kratom has the potential to be dangerous when abused and used recreationally. It may have some medical effects that have yet to be fully explored. Since kratom is not fully understood, or currently federally regulated, any use of the substance is risky and unpredictable. 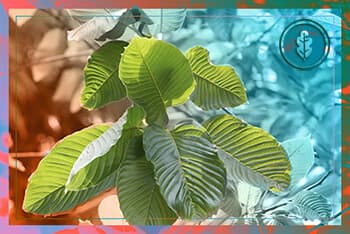 Kratom is most commonly used by those seeking to alleviate chronic or severe pain, or as a substitute substance for individuals battling opioid or alcohol addiction, the Washington Post publishes. Opioid withdrawal can be intense as individuals who are dependent on drugs like heroin or prescription painkillers suffer from cravings, flu-like physical symptoms, and emotional lows when trying to wean themselves off these drugs. Active ingredients in kratom, such as mitragynine and 7-hydroxymitragynine, may activate opioid receptors in the brain, leading to a euphoric “high.” While not as intense as an opioid high, it may still be pleasant and desirable, and it may work to temporarily stave off uncomfortable withdrawal symptoms.

Low doses of kratom can increase sociability, talkativeness, alertness, and energy. In higher doses, kratom can act more like a sedative, causing relaxation and a reduction of stress and anxiety. The DEA warns that kratom may also cause psychotic effects like hallucinations, confusion, and delirium as well as be potentially addictive itself.

Kratom is often regularly consumed with other drugs or alcohol, in a practice known as polydrug abuse. This is a potentially risky practice, as NPR publishes that 14 out of the 15 deaths linked to kratom abuse between 2014 and 2016 involved another drug or illegal substance.

Some physical signs and side effects of kratom abuse include:

Someone abusing kratom may also experience changes in behavior and their emotional state, which can include:

The New York Times warns that kratom use may cause seizures or also lead to depression and possible suicidal ideations. The National Library of Medicine’s (NLM’s) LiverTox warns that kratom may severely injure the liver and also possibly cause hypertension, agitation, respiratory depression, coma, or even death. Kratom may also be addictive in nature, and individuals taking the drug regularly can become both physically and emotionally dependent on it. Once this occurs, brain chemistry is altered as a result of chronic kratom use, and individuals may suffer from withdrawal symptoms when the drug is not active in the body. Muscle aches, insomnia, depression, tremors, hostility, and aggression are documented side effects of kratom withdrawal, the National Institute on Drug Abuse (NIDA) reports.

Difficult withdrawal symptoms and cravings may make it harder for individuals to stop taking kratom. Individuals may then not be able to control how much and how often kratom is used, leading to addiction.

Kratom is considered to be a potentially addictive substance with difficult withdrawal symptoms and cravings that can occur when someone who has been taking it regularly for a long period of time stops taking it. For this reason, detox is the optimal first stage in a treatment plan. Detox programs vary in intensity, from residential to outpatient settings, and generally last a few days on average. A drug screening and assessment process is generally done before admission in order to decide on the optimal treatment plan and level of care needed. After safely processing kratom out of the body, individuals should enter into a treatment program that includes both therapeutic and supportive measures in order to achieve and maintain sobriety.

Kratom may commonly be a drug of choice for those who suffer from opioid dependence and/or addiction. By helping to manage opioid withdrawal symptoms and cravings in an addiction treatment program, kratom abuse may become less desirable or feel less necessary. Kratom abuse may also stem from a desire to self-medicate pain symptoms, and a thorough assessment may be able to determine the medical complication that may be the cause, helping to minimize physical symptoms with pharmaceutical tools or other methods.

Kratom may seem like a desirable recreational drug because it is not technically illegal; therefore, it may not be considered to be as dangerous as other drugs. Young adults and adolescents may be drawn to a drug like kratom after reading about it online and feel that it is “safer” than other “harder” drugs. Being plant-based may make it seem “healthier” even. Educational programs can teach families and individuals the potential dangers of abusing kratom and provide information on more productive outlets.

Behavioral therapies are common elements of an addiction treatment program that are designed to help individuals discover the root of why they felt the need to abuse a drug like kratom in the first place. These therapies work to teach people healthier and more effective ways to cope with stress and potential triggers in the future. Counseling and therapy sessions can also help to uncover and treat any mental health concerns that may be present. Kratom abuse and addiction can be managed and cared for with a comprehensive and personal treatment program designed with the particular individual in mind.

herbalkratom
Prefer getting help via text?
We're available 24/7 via text message. Signup below for access to our team when its convenient for you!
and many more...
Get Help & ResourcesLearn aboutaddiction recovery at River Oaks.