Kratom for Opiate Withdrawal: Does It Really Work? 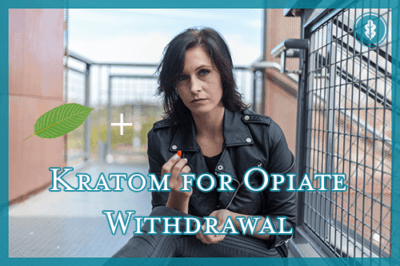 Kratom is the name applied to a tree and to an herb that comes from the tree Mitragyna speciosa Korth, which grows in southeastern Asia. The tree belongs to the same classification as the tree that produces coffee beans. People native to the region often use the shoots and leaves of the tree for numerous medicinal purposes. It is often brewed as a beverage (e.g., a tea), or the leaves themselves are chewed. At low doses, the substance appears to have stimulant-like qualities; when the drug is taken in larger amounts, opiate-like or sedative properties appear to predominate.

The psychoactive substances in the herb are believed to be mitragynine and 7-hydroxymitragynine, both of which are alkaloids. The herb is believed to have properties that can be used to treat infections, chronic pain, and even as an opiate substitute. The drug is available on various sources and the Internet. The United States Drug Enforcement Administration (DEA) has threatened to classify it as a Schedule I controlled substance and repeatedly expressed concern about the availability and use of the drug in the United States.

This is in contrast to a sort of cult-like following of the drug that can be witnessed by viewing the website of the American Kratom Association, an organization that touts the medicinal utility of the substance, but offers mostly questionable evidence for its claims.

At this time, the FDA (the Food and Drug Administration) lists no useful benefits for kratom; the DEA has again expressed concern about the availability of the drug and is again threatening to classify it in the Schedule I category, making it illegal to possess in any form except with special federal government permission; and the American Kratom Association is protesting the actions of both the FDA and DEA.

Some states have made possession of the drug illegal. At the time of this writing, kratom appears to be illegal in seven states and in some counties in states where the drug has not been made illegal to possess.

The American Kratom Association lists numerous anecdotal reports as evidence that kratom is useful in treating withdrawal symptoms from opioid drugs such as heroin, Vicodin (hydrocodone and acetaminophen), OxyContin (oxycodone), etc. However, unsubstantiated self-reports are not reliable and never substitute for empirical evidence (evidence from research studies).

There is very little published research regarding the effectiveness of kratom as a treatment for opiate withdrawal. The available research consists of a singular case study reported in the journal Addiction in 2008 that is used on many of the websites marketing kratom as research evidence of its effectiveness in treating withdrawal from opiates. However, the case study contradicts those who use it as evidence that kratom was used as a withdrawal management drug for opiates by the subject in the study and that the study provides evidence for this purpose.mc/a

First, the individual was discontinuing his use of hydrocodone and substituted kratom for it in a tea, taking it four times a day for four years. Essentially, he simply used it is an opiate replacement medication and did not use it in a withdrawal management protocol. The subject was reported to have spent $15,000 a year on kratom, making it impractical and expensive for most people because the drug has no research evidence to support its use and insurance companies will not pay for it to be used in this manner. When the person attempted to use kratom in conjunction with the mild stimulant modafinil (Provigil), he experienced seizures, indicating the potential for severe and adverse reactions when taken in conjunction with other medications that should be further investigated. When the individual finally decided to stop kratom he experienced a withdrawal syndrome; however, it was mild compared to the potential withdrawal he may have experienced from hydrocodone.

Thus, the most cited study does not provide evidence that kratom can be self-administered without medical supervision to treat opiate withdrawal symptoms unless the person decides to continue to use kratom indefinitely. Moreover, case studies are never used as research evidence to support the utility of any medical treatment because they suffer from many of the same faults that anecdotal evidence suffers from and are not considered as acceptable forms of evidence to support large-scale medical practices by any organization.

Another review in the journal Neuroscience and Behavioral Reviews published in 2013 reported numerous cases where kratom was used as an opiate replacement medication but not in withdrawal management protocols. The two applications are very different in much the same way that methadone can be used to control withdrawal from heroin and eventually the person is weaned off the drug, or it is also used as a substitute for heroin by addicts. Using a drug solely as an opiate replacement medication would simply be a medication used in place of an opiate drug, and the person would use the drug in place of an illicit drug like heroin and never be weaned off it. Some critics of this practice point out that one addiction is being replaced with another, and there is no “treatment” involved in this process. The person would have to keep using the opiate replacement medication in order to avoid withdrawal symptoms.

There is also evidence reported in journals such as Substance Abuse and Drug and Alcohol Dependence that kratom use is associated with the development of a mild syndrome of physical dependence despite claims by the American Kratom Association to the contrary. Use of the drug is associated with a mild withdrawal syndrome, which would suggest that it be classified as a controlled substance by the DEA if indeed it is found to have medicinal uses.

There are numerous mentions in various articles of the potential for kratom to be used as an analgesic and perhaps as a withdrawal management medication in the same way that buprenorphine, an opioid antagonist, is used.

However, at the time of this writing there do not appear to be any published clinical trials investigating the use of kratom for these purposes.

Until such research is conducted, it is approved by the government, and its medicinal use is formally documented, it cannot be considered a valid approach to treatment. There is a formal process that must be followed before any substance can be designated as safe and approved for medicinal use. Relying on anecdotal reports and complaints to the FDA and DEA are not part of the formal process of accreditation for any medication.

There is no such thing as a drug or medication does not have the potential to produce side effects. Any drug that results in alterations of an individual’s neurochemistry will produce side effects, no matter how strong its medical use is. The DEA has listed several side effects observed with the use of kratom in areas where the drug is indigenous and used as an herbal supplement or remedy.

These side effects include:

An important issue that is overlooked by companies trying to market kratom is that there are research studies that have documented that at least one of the chemical substances in kratom (mitragynine) has the potential to produce an overdose if its consumption is not checked. In addition, the DEA states that there are numerous documented cases of fatalities due to kratom overdose. Other studies, such as one published in the Journal of Medical Toxicology, report severe symptoms like seizures associated with high doses of kratom.

Thus, given the current state of the research and understanding of the drug, it is clear that special interest groups, such as companies trying to market kratom, are making claims about the potential medicinal use of the substance that are not clinically substantiated by proper research studies.

It is clear from the research that the substance is capable of producing significant issues associated with overdose and physical dependence; it may also have medicinal effects. While kratom could potentially be used at some point in the future to treat opioid withdrawal symptoms, there is a need for randomized controlled clinical trials to formally ascertain if the drug has utility as an opiate withdrawal management medication.