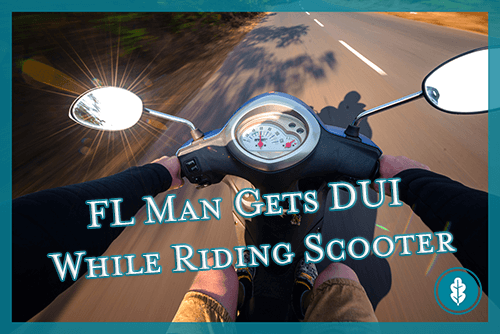 Yes, you can get arrested for DUI while driving a scooter under the influence – or riding a bike, driving a boat, or operating any vehicle. One Florida man learned this the hard way this month when he allegedly chose to drive his scooter after drinking. According to the Palm Bay Police Department, he had a dog in a shopping bag he was carrying, and when the dog hopped out of the bag, the driver lost control of the scooter and was forced to put it down, injuring himself in the process. When police arrived on the scene, they reported that they could smell alcohol on the driver.

Said Officer Darin Morgan of the Palm Bay Police Department: “When I asked him how much he had to drink, he said he had two ounces of vodka that he had mixed with cranberry and ice.”

While there is no reason to believe that the driver didn’t have the reported two ounces of vodka, it is likely that he drank far more. When tested, his blood alcohol content was reportedly 0.094 percent – 0.08 percent is the legal limit for operating a vehicle in Florida.

When he was arrested, police allegedly found that he had an outstanding warrant for his arrest related to a violation of felony probation for a battery charge in another county. Additionally, it was found that he has been arrested for DUI multiple times in the past.

Is DUI a problem all by itself? Or is it a red flag for serious issues that require immediate intervention?

On occasion, someone may have a drink or two with dinner, not realize how buzzed they are, and get behind the wheel. If they are pulled over when this happens and end up with a DUI, it may be the last time it ever happens, and they often stop drinking entirely if they expect to be driving at any point the rest of the day.

In most cases, however, this is not the scenario. Too often, a DUI charge indicates a regular pattern of drinking or drug use before getting behind the wheel that had previously eluded detection. It often also occurs in the context of other problems as well. Depending on the individual circumstance, this can include co-occurring mental health disorders, problems at home, difficulties at work, and more. If the situation does not currently include social issues, it will if heavy drinking or drug use that sustains intoxicated driving continues.

There is no justifiable reason for driving while under the influence. It is a behavior that not only risks the safety of the person driving but others in the car and on the road as well. Additionally, it puts a heavy burden on taxpayers. All the costs associated with law enforcement, courts, healthcare, lost productivity due to accident, injury, death, and more fall on taxpayers to cover and take funding away from other areas, a burden of as much as $132 billion per year, according to Pacific Institute for Research and Evaluation (PIRE).

DUI or any charge related to being under the influence is a huge red flag that it is time to step up and take action before anyone else is put at risk.

If your loved one is regularly driving while under the influence and unable to manage the behavior on their own, you can:

Are you ready to take a step toward recovery for your family today?