Where Would Iconic Musicians Be Today Without Drug Use?

Written by: Editorial Staff
Last updated on May 9, 2019

Drugs and drug addiction have claimed the lives of people the world over, and famous people are no exception. Among the most notable victims of substance abuse issues from the world of pop culture are musicians, including all-time legends like Jimi Hendrix, Janis Joplin, and Prince.

For decades music fans have mourned when their favorite artists have passed away ahead of their time, something that is still sadly all too common. When these artists tragically pass away, they leave their music behind as a legacy to their talent. While those legacies are incredible works that fans can continue to enjoy, one can’t help but wonder how much potential music they could have produced in the future.

We got to wondering about the potential of that lost music so much that we decided to try our best at figuring it out. We started by looking at musical artists that have died of drug-related causes since the 1960s and chose 25 of the most influential ones to evaluate. 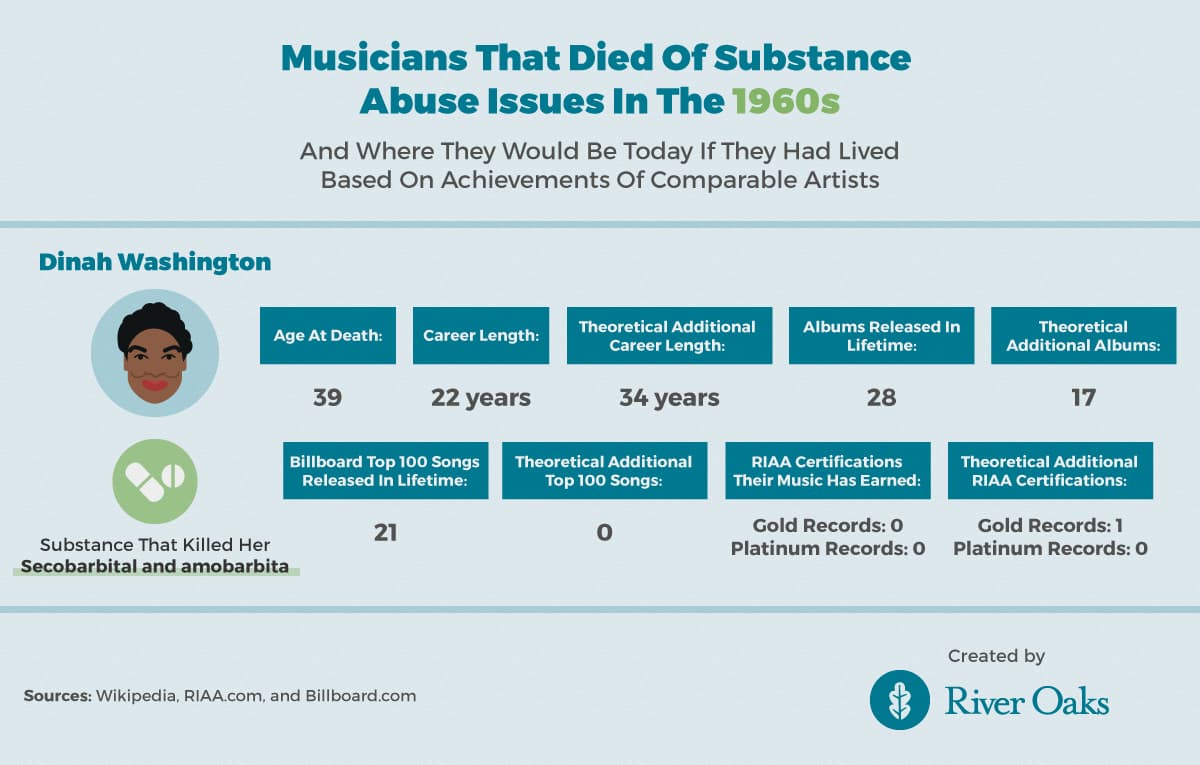 For every artist we chose, we started by looking at how much music they actually produced in their lifetimes to give an understanding of their baseline level of work. We then used https://www.music-map.com/ to identify artists who are stylistically similar to them and chose those with careers that most closely resembled the dead artists to either the year or age of their passing.

Using those comparable careers as our guide, we were able to estimate approximate levels of further music that we could have expected from each deceased musician, as well as how much longer their career could have lasted. For singer Dinah Washington, the lone musician in our analysis that passed away in the 1960s, we theorize that she would have spent an additional three decades making music, a stretch that could have seen her produce nearly 20 albums of new material, including one that would have earned gold record status.

Some of the most famous musician deaths of all time occurred in the 70s, with Jimi Hendrix, Janis Joplin, and Jim Morrison all passing away at the same age in this decade establishing the infamous “27 Club,” which sadly expanded its membership in ensuing decades. Of the seven musicians we evaluated from this decade, we estimate that all but one would have doubled their actual career output had they lived longer, with every musician’s additional career length consisting of at least 20 extra years. 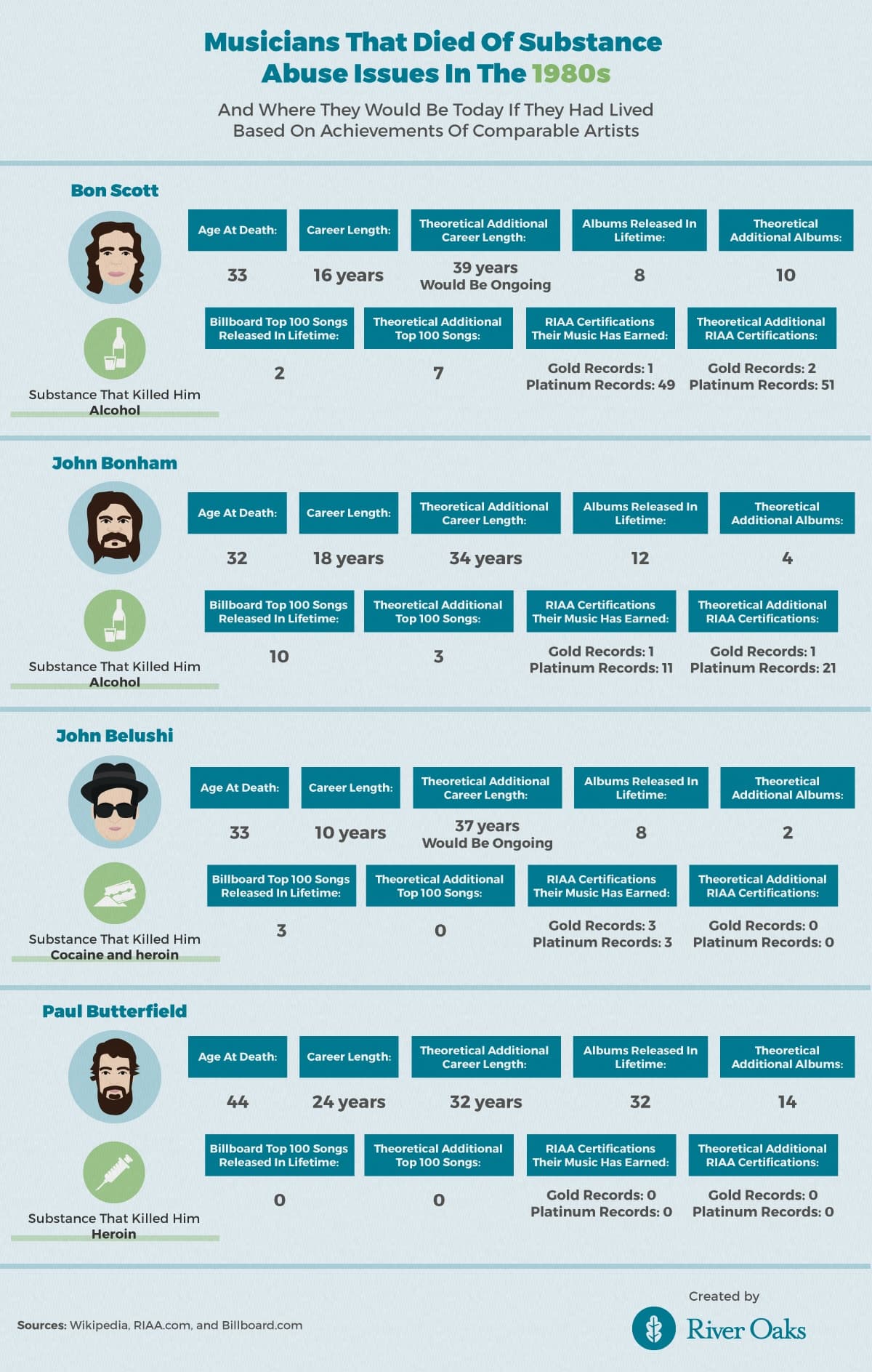 The 1980s didn’t see as many musicians die of drug-related causes as the 70s, but it did include one of the most impactful deaths of this entire analysis, as John Bonham’s untimely passing directly lead to the break-up of Led Zeppelin, one of the most legendary bands of all time. While Zeppelin chose to disband and (mostly) stick to that over the years, the members of AC/DC went the opposite direction after lead singer Bon Scott passed away due to alcohol poisoning, replacing him with Brian Johnson and somehow matching the dizzying highs they had reached with Scott. 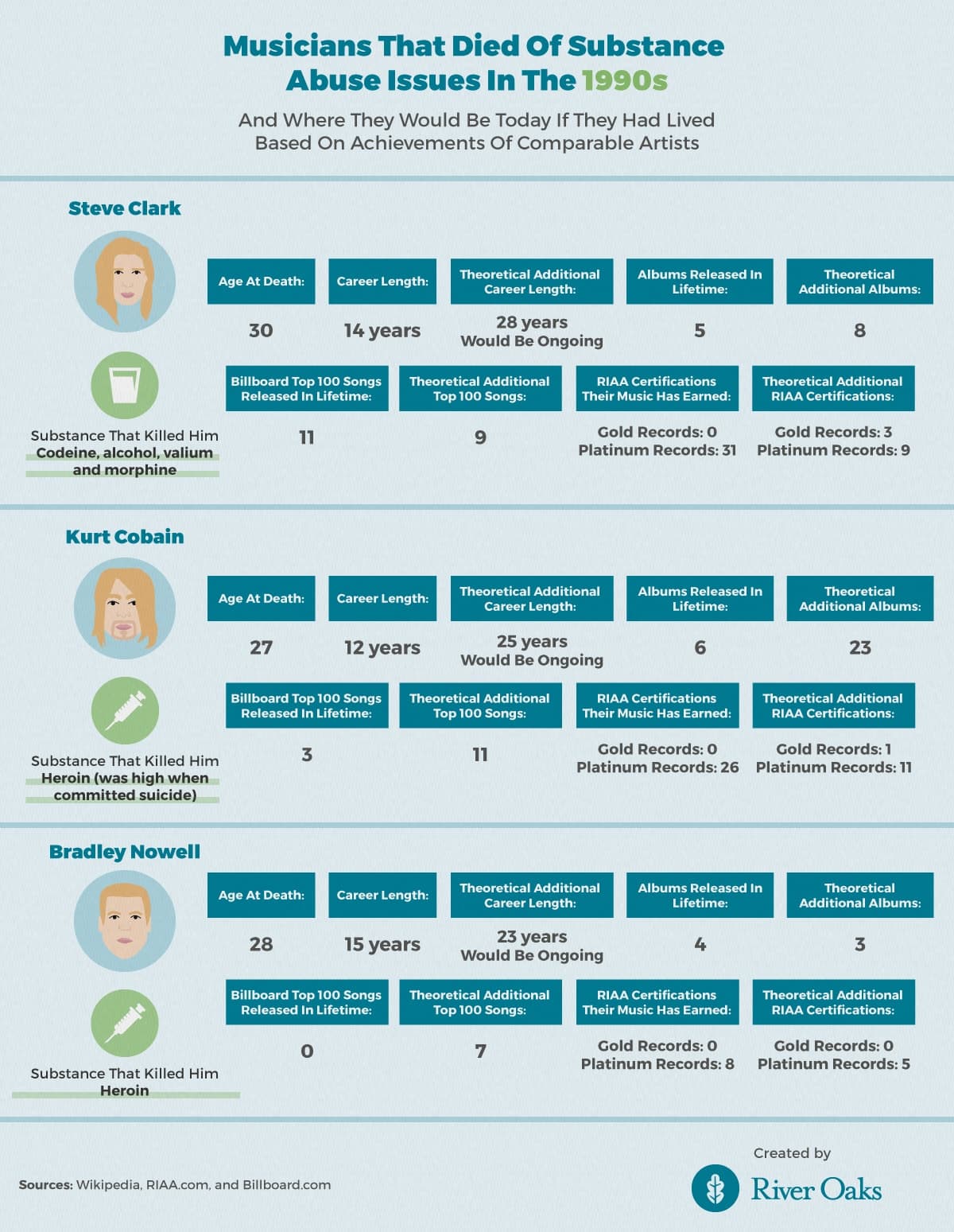 One of the most famous and influential figures of the entire 1990s was Nirvana frontman Kurt Cobain, who killed himself while high on heroin. His death marked the first major new entry in the 27 Club started in the 70s, and according to our estimations, deprived the world of over 20 albums of new music and nearly a dozen top 100 hit songs. 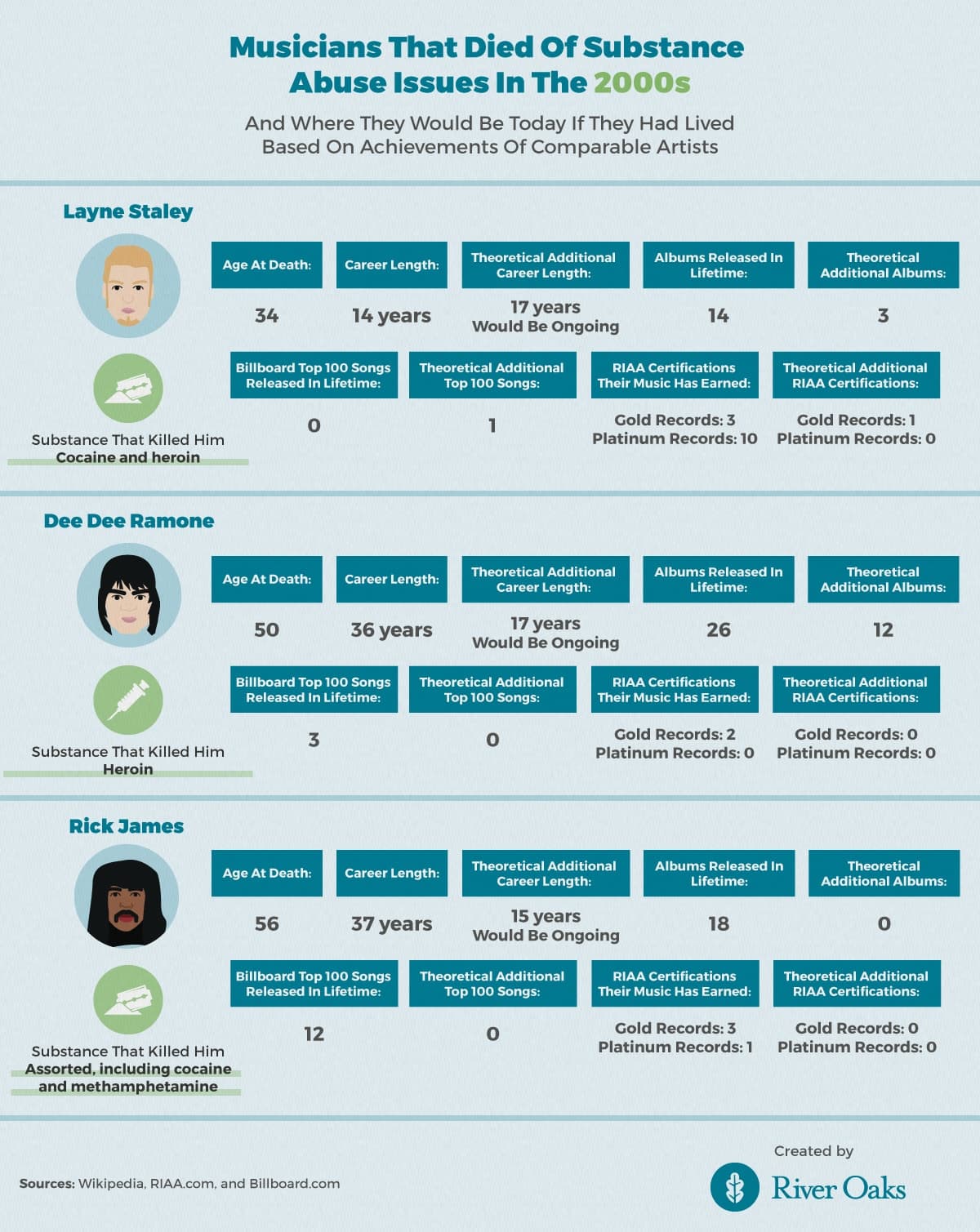 Interestingly, of the musicians that passed due to substance issues in the 2000s, two were over the age of 50 at the time of their passing, having already enjoyed lengthy careers. That doesn’t mean they didn’t have more to offer the world, however, as our comparative artists indicate that both Dee Dee Ramone and Rick James could still be performing and entertaining audiences to this day without their substance issues.

The 2010s actually matched the 1970s for the most musician deaths in our analysis, and the decade isn’t even over yet. In recent years all-time great talents like Prince, Tom Petty, and Whitney Houston have passed away, and the 27 Club claimed another member with the tragic death of Amy Winehouse.

An important note to mention for this graphic is that the theoretical production numbers we have given each artist are based on a comparable musician’s actual production since the age or year that the deceased artist passed away. This means that for these deaths, which have taken place in the last handful of years, there has not been much time for comparison artists to produce new music, so while the numbers we have here are low now, that does not mean they won’t rise as our comparison points continue their careers. 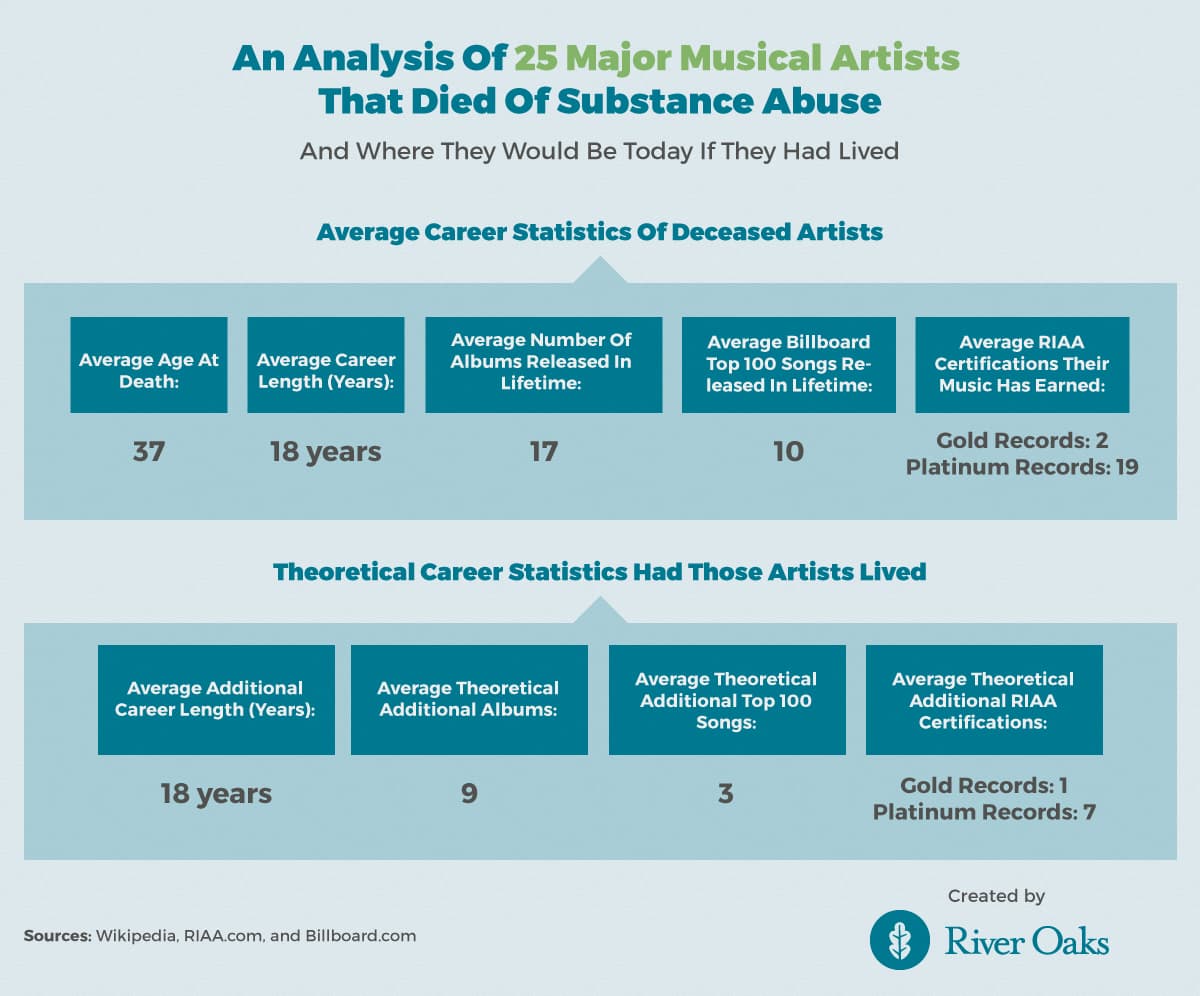 We also took all of our data and estimations for all 25 artists and averaged them together to give a general look at how much music they could have produced on average. We found that one average these artists would have enjoyed an additional 18 years of career length, which would have seen them produce 9 albums of new material and 3 top 100 songs on average. Those albums averaged an additional gold record and seven platinum certifications from the RIAA in terms of sales.

Of course, musicians are far from the only people that struggle with drug and alcohol addiction, and at River Oaks, we know that better than most. If you or someone you know is struggling with substance use and addiction, our website has a comprehensive resource center we hope can help. And for those located in the Tampa, Florida area, our top-notch rehabilitation facility is here to help.

Can I use this information?