Dangers of Snorting and Smoking Percocet 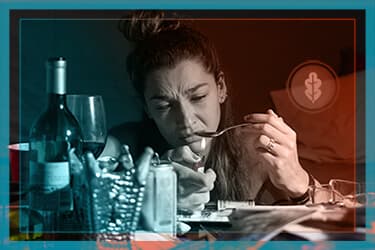 Percocet, an opiate painkiller that combines both oxycodone and acetaminophen, is commonly prescribed for the treatment of acute pain that is moderate to severe. When used for only a brief period while a patient heals after accident or surgery and according to a doctor’s orders, the medication is safe for use. However, if the drug is abused in any way or taken without a doctor’s prescription, the result can be a substance use disorder, including addiction, or overdose that can result in death.

The risks associated with use of Percocet are increased when the drug is used in a way that is not recommended by doctors, and snorting or smoking the drug are both behaviors that fall into that category. Both methods of ingestion facilitate a more rapid onset of side effects, including the “high” associated with use, which in turn can increase the likelihood of experiencing the dangers that can come with Percocet abuse.

One of the primary dangers of snorting or smoking Percocet is the potential for overdose. In any form, Percocet can overwhelm the system, causing medical emergency that can result in death. Depending on the dose, underlying medical health issues, and other drugs used in conjunction with Percocet, the specific medical issues that result in death may vary. However, in most cases, overdose occurs due to a slowing of the breathing and/or heart rate until both stop completely. If medical assistance is not immediately available to stop the mechanism of the drug in the body, then death will occur.

Overdose may be an increased danger if:

Accident under the Influence

Percocet can dull one’s sense of pain and contribute to an openness to choices that may not be safe. For example, driving while under the influence of Percocet is dangerous due to slowed response time and lack of awareness. Similarly, one may also be less capable of taking care of dependent children or elderly family members, operating machinery, or managing personal medications for chronic illness. Inadvertently taking too much of an overwhelming substance, mishandling an object, or neglecting those who require intensive care can lead to deadly accident for the individual under the influence and/or others.

Ongoing use of Percocet as the doctor ordered can lead to physical dependence. When this is coupled with psychological dependence on the drug, addiction becomes an issue – a chronic medical disorder that can increase the risk of overdose, accident, and social problems associated with drug use and abuse. Abusing Percocet in any form, including crushing the pills and then smoking or snorting them, significantly increases the risk of developing an addiction to the drug. When this occurs, this can result in:

ingestionprescriptionsnorting
Ready to get started?
We're available 24/7 to answer questions and help you make decisions about starting recovery.
Get Help & ResourcesLearn aboutaddiction recovery at River Oaks.