Trends in Prescription Drug Misuse Across the U.S.

Content surrounding drugs like cocaine, heroin, and methamphetamine, are seemingly unavoidable in today’s society, especially in popular culture. But, as loud as the conversations concerning illegal drug abuse are, the practice is just the tip of the iceberg. Pharmaceutical drug abuse has become a silent disease among multiple populations in the country. And though drug companies have tried to more strongly regulate their distribution, it’s continuing to increase.

We were curious to see which states had the most and least amount of people abusing prescription drugs and how they were obtaining them. To find this out, we used data from the 2017 SAMHSA survey to find the rates of prescription drug misuse in each state among adults aged 18 and over. Keep reading to see what we found.

Rate of Prescription Drug Misuse in Each U.S. State 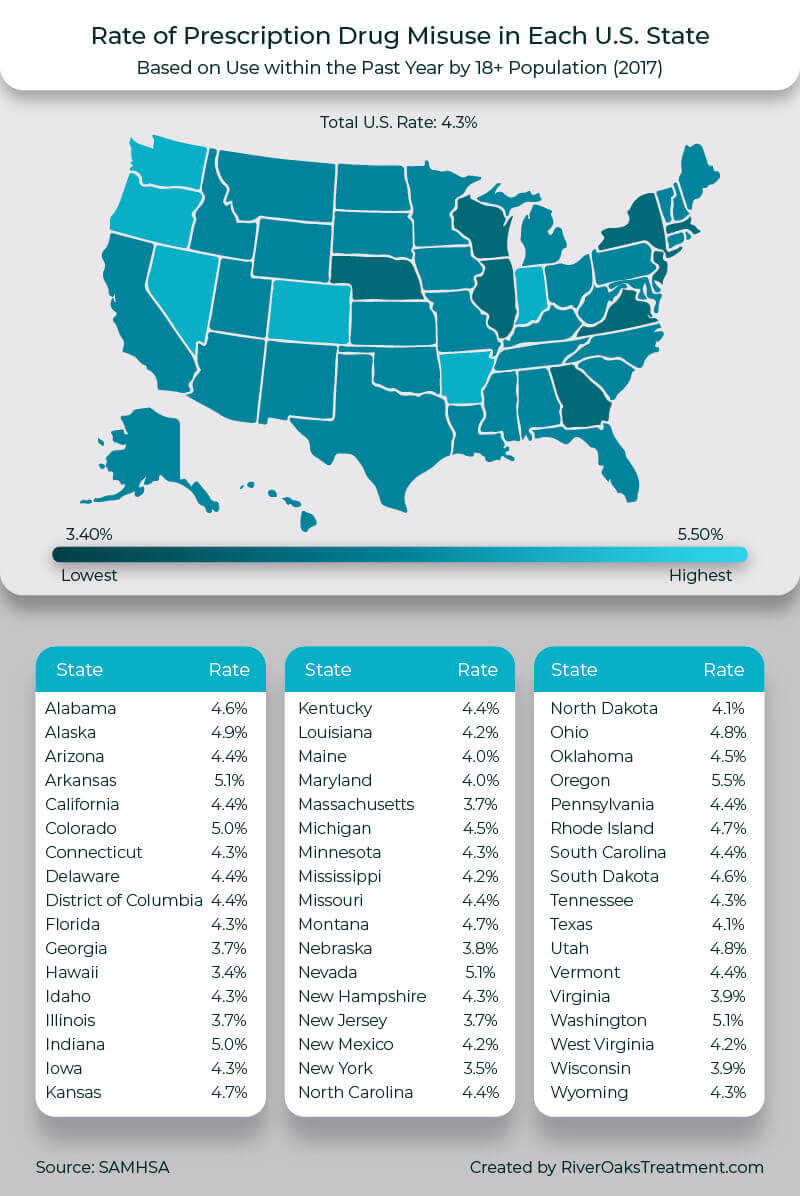 To kick off our research, we looked at federal data on pain reliever misuse across the U.S. to see which states have the highest and lowest rates of abuse. Oregon has the highest rate, with 5.5% of the population misusing drugs classified as pain relievers. The states with the next highest rate are Arkansas, Nevada, and Washington, all tied with a rate of 5.1%.

Looking at the other end of the spectrum, Hawaii has the lowest rate of prescription drug abuse with 3.4%. After it comes Georgia, Illinois, Massachusetts, and New Jersey with a rate of 3.7% each. If you are interested in seeing where your state falls, feel free to check the chart above.

Trends in Pain Reliever Misuse in the U.S. 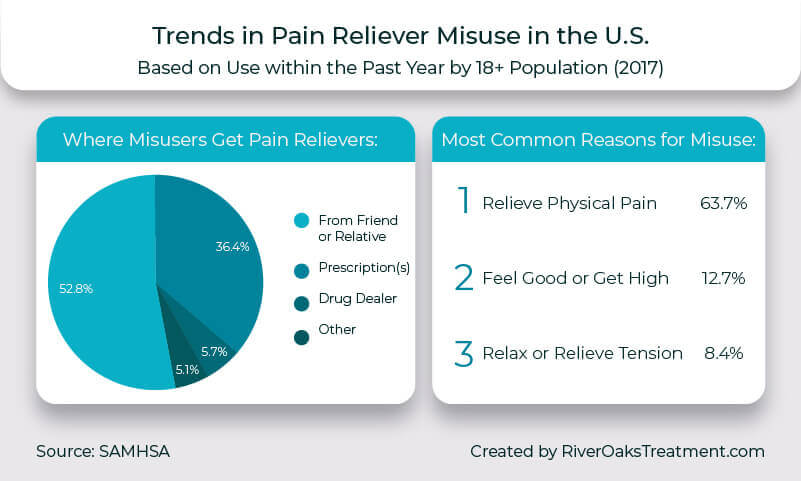 Next, we wanted to take a look at where people get their prescription drugs and what some of the most common reasons of misuse are. When looking at pain relievers, we found that 52.8% of the people surveyed got them from a friend or relative, while 36.4% of people were prescribed their pain killers. The main reason for misuse cited was to relieve physical pain, according to 63.7% of respondents. Other people misuse pain relievers to feel high or get high (12.7%) and to relax and relieve tension (8.4%).

Trends in Tranquilizer Misuse in the U.S. 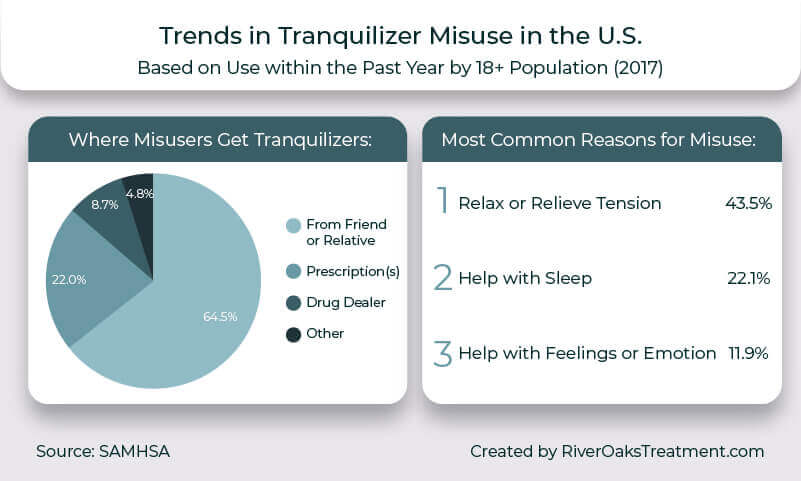 The next prescription drug we looked at was tranquilizers. Again we found that the majority of people, 64.5% of the respondents, received their drugs from a friend or relative. Only 22% of people had an actual prescription for their drug and an even smaller number (8.4%) got the tranquilizer from a drug dealer.

Trends in Stimulant Misuse in the U.S. 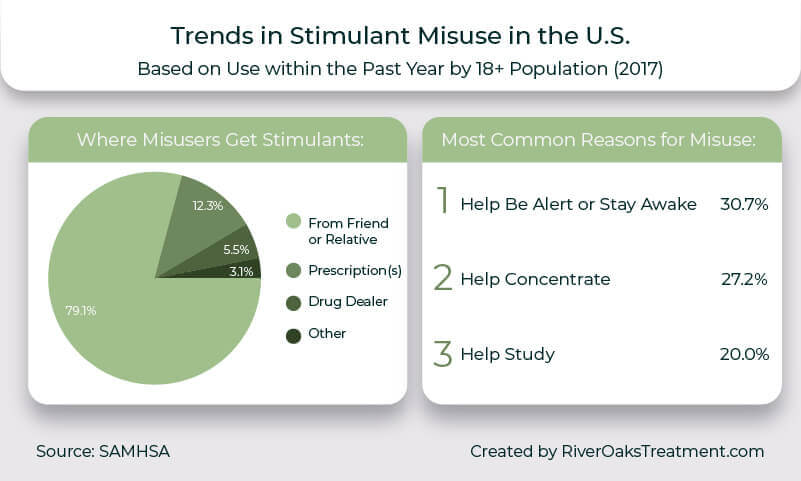 Stimulants, like amphetamines, are another prescription drug that is often misused. When asked where they got them, 79.1% of people surveyed said that they get their stimulants from a friend or relative, while only 12.3% of people were prescribed them. Looking at the reasons why people take them, it’s a fairly even split between needing to stay alert or awake (30.7%), helping concentration (27.2%), and study assistance (20%).

Trends in Sedative Misuse in the U.S. 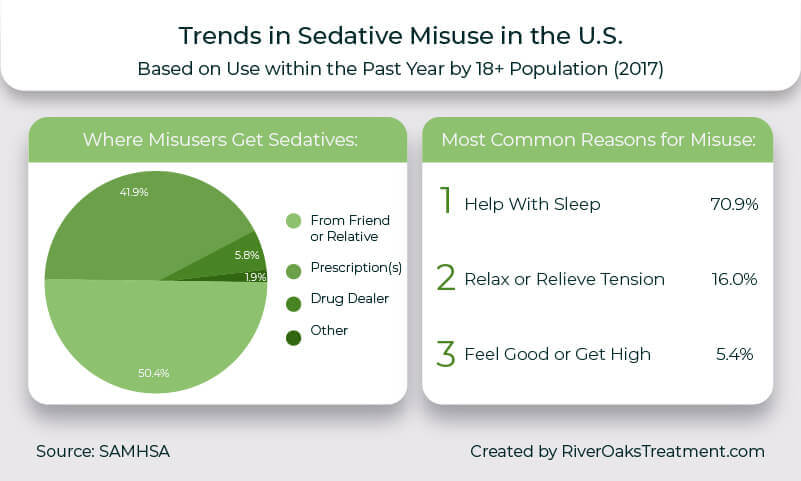 The last prescription drug type we looked at were sedatives. Continuing with the trend from all the other drug types, just over half of the respondents, 50.4%, said that they received their sedatives from a friend or relative. 41.9% of the population noted that they had a prescription for their sedatives. When asked why they misused, 70.9% of respondents said that they needed them to help them sleep. Other reasons cited were to relax and relieve tension (16%) and to simply get high (5.4%).

Drug abuse, with both illegal and legal drugs, has touched the lives of millions, but there is hope. If you are struggling with drug dependence, please do not hesitate to get in contact with River Oaks Treatment. We’re always here to help get your life back.

Prefer getting help via text?
We're available 24/7 via text message. Signup below for access to our team when its convenient for you!
and many more...
Get the Info & Help You NeedBrowse 100s of informative articles and find treatment.