Details matter, but when drugs are part of the picture, it is almost impossible to avoid making mistakes that can be life-altering. For more than a few drug dealers and drug traffickers in Florida, a seemingly innocuous choice ended up giving police the information they needed to intercept or shut down their business. 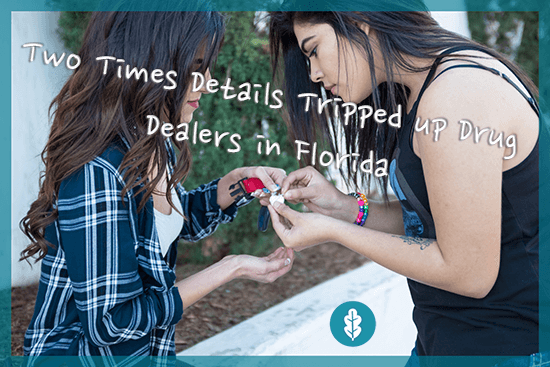 Here are two times that drug dealers in Florida tripped up and gave themselves away:

When one drug dealer in Martin County installed six security cameras to help him better manage his business, the cameras ended up helping police more than they helped him. Detectives found a great deal of stored video that documented all drug sales done on the premises, allowing the officers to not only cement the charges against the drug dealer himself but to also identify and track down all customers as well.

Why would someone engaging in illegal activities go to such great lengths to document their activities? He reportedly said that he put in the cameras because he was fearful of being robbed. Though it is unclear how cameras would have thwarted an attempted robbery, they certainly will do little to help his case when he stands in front of a judge to answer to charges.

Another drug dealer in Florida also had an objectively unreasonable expectation when it came to protecting himself from theft. One dealer in Fort Walton Beach, Florida, suspecting that someone had stolen his cocaine from his car, called local police for assistance. He stated up front that he was a drug dealer and that someone had taken $50 in cash and a quarter ounce of cocaine out of his car. Officers did in fact meet him on the scene and noted that the items he was in search of were not in the place where he said he had left them; however, they did find a second bag of cocaine in the center console, a crack rock, and a crack pipe.

The dealer was arrested and charged with felony possession of cocaine as well as possession of drug paraphernalia and resisting arrest without violence when he refused to follow the officer’s orders.

Very often, drug trafficking across the country happens through the mail. Drug dealers find houses that are abandoned and/or homes where the occupants are away at work all day, and use these addresses to send packages. When they give the address to a partner across the country, that person simply mails a shipment to these addresses where someone will check regularly and wait for its arrival, grabbing the box before the owners or occupants of the home find it.

When one woman opened a package that she thought was a yoga mat she had recently ordered, she was shocked to instead find a package containing about 20,000 illegal pills valued at about $400,000. The package was addressed to her previous home that was standing vacant but because the drug dealers misspelled her address, the package was rerouted using her name. A seemingly small mistake caused the dealers to lose big – not only were the drugs seized but police are using the package to track down the person who shipped the drugs in the first place.

While this particular incident did not happen in Florida, it’s worth a mention as many drug dealers in Florida receive shipments of drugs from cartels in South America and then use the postal service as a means of transporting it across the country – and it’s yet another case where making a little mistake can have big consequences.

Consequences of Drug Use and Addiction

In the same way, those who use drugs often find that it is the little things that cause the greatest harm. Inadvertently taking just a bit too much of one drug, having a drink with a prescription pill, or accidentally taking a substance they believe to be one thing only to find out it is a much more potent drug can cause overdose and sudden death. Choosing to drive a few miles to get home while under the influence may seem like a small risk to take in the moment but it can destroy lives.

When drug use is part of the equation, there are no choices that are innocuous. Every day spent dealing or using illicit substances puts the individual and everyone around them at risk, and the only way to effectively mitigate that risk is to connect with treatment services that empower cessation of use of all drugs and alcohol.

Are you ready to start making safer choices for yourself and your family?