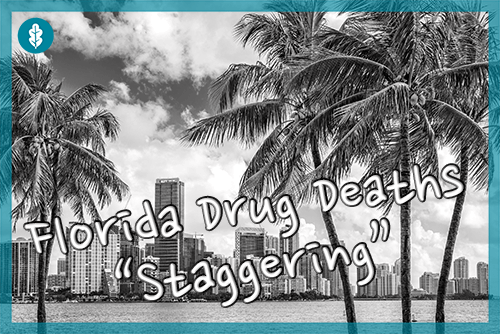 Recent reports from Florida’s medical examiners demonstrate that our worst fears are materializing in Florida when it comes to the consequences of substance abuse and addiction. There have been huge increases in the numbers of overdose deaths due to drugs of all kinds across the state. The most significant change, however, was the number of fatal overdoses caused by the use of fentanyl, an incredibly potent synthetic opiate in the same drug family as morphine and heroin.

But it is not just the use of fentanyl and other opiate drugs like heroin and prescription painkillers that are cause for concern; use of all substances has increased and so has the number of deaths related to this use.

Florida examiners also found that prescription drugs killed more Floridians than heroin in 2016. Specifically, the number of overdose deaths caused by use of oxycodone leaped 28 percent. Often, it is an opiate drug in combination with another substance – especially alcohol, other prescription drugs, or marijuana – that causes the overdose.

The presence of methamphetamine in the systems of those who died of an overdose increased significantly as well – by 103 percent. Cocaine overdose deaths, too, increased by 83 percent. Clearly, it is not just the opiate drugs that so frequently make headlines that are doing damage in Florida.

All told, the individual findings lead to one resounding and unsurprising conclusion: The problem of substance use, abuse, and addiction has reached epidemic proportions, and it will continue to worsen until we hit on the right combination of changes to roll those numbers back down.

Senate Criminal and Civil Justice Appropriations Chairman Jeff Brandes was not wrong when he called the findings of these reports “staggering.” Said Brandes: “Imagine if we had a plane crashing in the state every month. We would do everything we could to stop that. That’s about the amount of people who are dying every month due to opioid addiction. We must put the same effort that we would put into a plane crashing every month and stopping that into this opioid addiction. It’s going to take an all-hands-on-deck approach to this.”

Unlike Trump, who recently declared the opioid epidemic a national public health emergency, Brandes does not believe that the best way to handle the problem is to put more Floridians behind bars, especially when their primary “crime” is addiction.

Says Brandes: “We have to define success and to me success is not more incarcerations. It’s less deaths. That needs to be the number one goal that the legislature has. We want less opioid deaths in Florida. And we’ll do everything we can to focus on less deaths.”

Regardless of the effect – or lack thereof – of Trump’s declaration, Governor Rick Scott is already moving forward to help Florida become a safer place for families struggling with addiction. He has released a detailed plan, including an allocation of significant funding, for the purposes of turning the opioid epidemic around for Florida in the coming years. The hope is that with the steady determination of people in power to vote on legislation, the hard work of the medical community, and the support of local communities that have been hit hard by the crisis, we will be able to see a downturn in the rates of overdose from any and all substances, not just in Florida but across the country.

What Can You Do?

As you head into the holidays with your family, you may not have the power to stop the overdose epidemic, but you do have the power to help a loved one in crisis. If someone you care about is clearly in need of assistance, your words of support and encouragement as well as your assistance in helping them to find the right treatment program can be a lifesaver.

What will you do to assist your loved one facing addiction this holiday season?