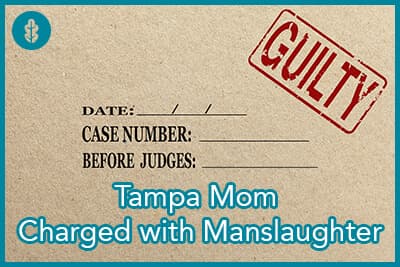 A mother in Tampa has been charged with manslaughter six months after the death of her eight-week old baby boy when lab results showed traces of cocaine in the baby’s system, bottle nipple, and diaper.

Although the mother vehemently denied that she had anything to do with her son’s death, deputies found a glass pipe with traces of cocaine hidden inside a dirty diaper in the trash, traces of cocaine in her system, and a Brillo pad that appeared to have been used to smoke crack. She appeared to be under the influence of drugs at the time she interacted with officers on the day of her baby’s death, and the baby’s body temperature was more than 105 degrees. As a result, she lost custody of another child at the time of her baby’s death.

In an attempt to defend herself, the mother reportedly admitted to hiding the materials used to smoke crack “because she was scared.” At first, it was not clear whether or not the mother’s use of cocaine had contributed to the baby’s death specifically, but when tests came back showing traces of cocaine in the baby’s bottle nipple and in his urine, law enforcement pressed manslaughter charges on the mother.

Meanwhile, the woman response to her child’s death was one that many people struggling with active addiction have, especially when faced with the consequences of using drugs: complete denial.

She posted on Facebook: “Its not fair!! My life puzzle was coming together and once again the pieces are all over the floor and I just don’t know how to fix it … What did I do in life to deserve such a harsh punishment? I have made mistakes but I always loved my kids. I’m not a bad mom and I would never, ever hurt my children.”

Is Denial Caused by Addiction?

It is true that the nature of addiction is such that regular and long-term use of an addictive substance can alter how the brain functions and perceives the world. Everything is viewed in light of the addiction, so use of drugs is considered a necessary given. Any problems that result due to drug use are seen as the fault of something else, including others remotely related to the situation or who came in after the fact, fate, or imagined conspiracy.

To an objective viewer, the fact that a child died with cocaine in his system, indicating exposure to the drug within six hours of his death, paired with tests identifying use of crack or cocaine in the mother’s system and a host of drug-tainted paraphernalia in the home, clearly show that the adult who allowed drugs in the vicinity of the child is at fault.

But people living with addiction are not objective. Their beliefs as well as their behaviors are heavily skewed by their use of substances. However, it is also true that the inability to accept reality can be a mental health issue. This is seen in cases where people living in addiction get sober and still deny that they played an active role in the problems that befell them during active addiction.

There are a number of mental health disorders characterized by the inability to accept reality or the constant practice of self-aggrandizing so they are not responsible for wrongdoing. However, it can also be an automatic protection measure for those who are not emotionally equipped to handle the pain, grief, and guilt associated with fully embracing one’s part in tragedy that occurred during active addiction.

Are You in Denial?

If your loved one is living with an active addiction and you are refusing to recognize the potentially deadly risks, or if you are using drugs daily yet unwilling to recognize how that choice is impacting your relationships, work prospects, and legal issues, then denial is most likely the underlying issue.

Do you need help getting a grip on reality and taking positive action to make the changes necessary to heal? If you, or your loved one, are living with an active addiction, you can start right now, today, to learn more about the addiction treatment services that will make a difference.