Does Withdrawal Occur from Antidepressants? 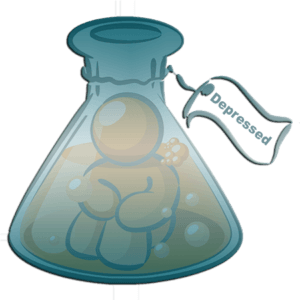 When the term antidepressant medications is used, it refers to a specific type of medication that has the primary function to treat depression in people. A number of different medications may be used for people who are diagnosed with depression, but this class of medications consists of several subclasses. Many of these medications also have other medicinal uses, such as to treat anxiety, chronic pain, fibromyalgia, eating disorders, personality disorders, obsessive-compulsive disorder, and a number of other disorders/conditions.

At one time, this was a controversial topic; however, it is generally considered that there is a potential to develop tolerance to and withdrawal from antidepressant medications under certain circumstances. Before going any further, it is important to differentiate the notions of physical dependence(tolerance and withdrawal) from addiction or a substance use disorder.

The development of physical dependence occurs in regard to many different types of drugs/medications. This occurs when individuals take a drug over time, their systems become habituated to the drug, and they need more of the drug to achieve the effects that were achieved at lower doses (tolerance).

Tolerance and withdrawal symptoms (physical dependence) are potential signs of an addiction, but just having tolerance and withdrawal symptoms do not indicate that a person has an addiction. For instance, individuals can take antidepressants for years under the supervision of a physician and use them as directed. Some of these individuals will develop physical dependence on the antidepressants but they will not have an addiction. An addiction is a disorder of behavior that occurs as a result of the nonmedical use of specific drugs or medications that leads to a number of dysfunctional outcomes (the term addiction is now referred to as substance use disorder in professional and clinical contexts).

Thus, one can experience tolerance to and withdrawal from antidepressant medications and not be abusing or addicted to them.

While there is some documentation that antidepressant medications are occasionally abused, they are most often abused in the context of polydrug abuse where an individual abuses several different drugs, such as alcohol, benzodiazepines, antidepressants, etc. It is rare for an individual to abuse antidepressants alone or take them for nonmedical reasons. However, there is a defined withdrawal process for individuals who have taken antidepressants for a significant length of time. This syndrome is known as an antidepressant discontinuation syndrome (ADS). Anyone who goes through ADS is not necessarily suffering from a substance abuse disorder or an addiction, but that does not make the distress associated with the withdrawal syndrome any less severe.

Timeline of the Development of ADS 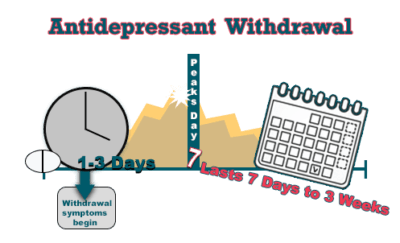 The actual timeline that will develop in individual cases may vary depending on the type of antidepressant medication used, the amount of the medication taken, the length of time using the medication, and individual differences in physiology. However, research on ADS suggests that unlike other types of withdrawal syndromes, the timeline is relatively linear and not defined by specific stages or specific symptom clusters as in withdrawal from alcohol or narcotic medications.

The general timeline for ADS is reported as following this pattern:

As mentioned above, there are no clusters of symptoms that appear together and designate different phases of the withdrawal process. The symptom profile is variable, and different individuals may experience different combinations of symptoms. For reasons of simplicity, the symptom profile can be generally broken down into groups of potential symptoms; however, please be aware that these may not occur together but most likely will occur in different combinations.

Unlike withdrawal from alcohol or benzodiazepines, the withdrawal that occurs from using antidepressant medications is not generally considered to be potentially dangerous. However, individuals who experience significant mood swings or depression might be at risk for self-harm. Moreover, individuals who have extreme physical reactions may be at risk for accidents or potential mishaps due to impaired judgment as a result of their compromised physical and mental condition. 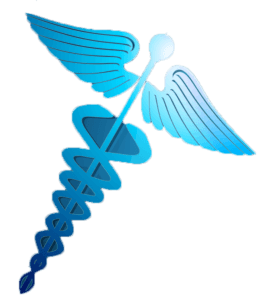 Often, individuals who are experiencing ADS and begin having issues with depression and or anxiety as part of the ADS symptom profile mistakenly believe that their depression is returning and begin taking the antidepressant medication again. As the symptoms of ADS resolve rather quickly when one resumes their antidepressant medication, this is taken as further evidence that they need to continue to take the medication or they will become depressed again. There has been a bit of a controversy stirred by this particular practice and by several findings suggesting that antidepressant medications may not be as effective in the treatment of depression as originally conceptualized. Interested readers can read the books The Emperor’s New Drugs and Psychiatric Drug Withdrawal: A Guide for Researchers, Therapists, Patients and Their Familiesfor a bit of a different perspective on these medications and their effects on depression. Both of these books are written by doctorate-level mental health professionals.

Because the symptoms of ADS are generally mild, and there are no specific medications to address ADS, medically assisted treatment most often considers administering medications to treat certain symptoms, such as nausea, headache, etc.

The best overall approach to negotiating ADS in individuals who want to discontinue using their antidepressant medication is to adhere to a medically assisted tapering strategy.

Under the supervision of a psychiatrist or other physician, the dosage of the antidepressant medication is periodically tapered down to allow the person’s system to become used to functioning with decreasing levels of the drug present. Once the level of the medication reaches a minimum amount, the physician discontinues it altogether. This tapering medical detox strategy typically avoids any symptoms of ADS that are potentially distressing.

antidepressantsdetox
Get the Info & Help You NeedWe're open across the US. Learn about your options.