The Process of Detoxing (Day to Day) 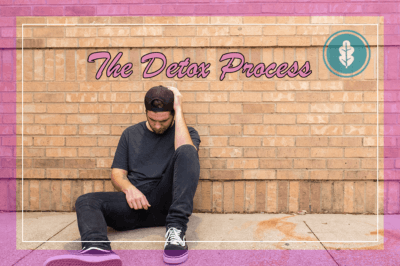 To understand what happens to the brain and body during drug detox, it is necessary to first consider how the brain works and how drugs work in the brain. As the National Institute on Drug Abuse explains, psychoactive drug use causes alterations in the neural activity within the brain stem, cerebral cortex, and the limbic system. The brain acts like a communications hub for the body and is composed of millions of brain cells, or neurons. Neurotransmitters are chemicals that carry messages between the brain neurons (and hence different systems, like the reward system within the limbic system).
To take an action or to stop an action, the brain relies on its messaging system, which works as follows:

Psychoactive drugs alter the above process. Drugs dock onto receptors and activate them. Depending on the drug, the activation can have different results. For example, the THC in marijuana activates cannabinoid receptors that tell the brain to slow down its activities. Other drugs, such as cocaine and amphetamine, can attach to receptors and cause the brain to be flooded with feel-good natural neurotransmitters or prevent the brain from clearing these chemicals from the synapse. Drugs of abuse have the ability to directly or indirectly target the reward system in the brain and cause an intense release of dopamine. This process explains, in part, why certain drugs have a wave-of-pleasure sensation.

The brain is a creature of habit. When a person repeatedly uses a psychoactive drug, the brain adapts to it presence. The detox process can begin when a person who has been experiencing substance abuse stops taking the familiar drug. Withdrawal is a natural side effect of detoxification. The withdrawal symptoms that emerge are the aftereffects of the brain, now used to a drug, being without that drug.
Across different drugs of abuse, the following are some of the most common withdrawal symptoms:

Different drugs of abuse have different withdrawal periods. According to Mental Health Daily, opiate (heroin) withdrawal takes about 7-10 days. Cocaine withdrawal can be as short as a week and as long as a few months if a person develops protracted withdrawal syndrome. Prescription opioids have various withdrawal timelines. Taking hydrocodone as an example, the withdrawal peak may occur at the 72-hour mark, and symptoms may persist for days or as long as a month or more. Typically, withdrawal from marijuana lasts approximately two weeks. Per WebMD, alcohol withdrawal symptoms can manifest as soon as two hours after the last drink and continue for weeks.

It is important to bear in mind that some factors can cause the withdrawal process to be longer than average times.

As a general matter, the more severe a person’s substance use disorder, due to factors including the volume of consumption and length of abuse, the more acute the withdrawal symptoms may be. In addition, it may take longer to reach complete detoxification or to stabilize on a substitution medication.

What to Expect in the First 7 Days of Detoxification

No two people withdraw in the same way. There is a general advisement that anyone who has been experiencing substance abuse and is ready to stop seek professional help. A medically supervised detox can provide the necessary services to ensure the process is safe and comfortable.

Notes the National Institute on Drug, the drug relapse rate is 40-60 percent. A medically supervised detox can provide an important safeguard against relapse. When deciding whether to opt for detox at a rehab center, it is helpful to consider what to expect day to day.

In 2016, CBS Evening News produced a series, “In the Shadow of Death: Jason’s Journey,” to educate the public on drug abuse, detox, and recovery through one 30-year-old man’s experience. Jason Amaral, a native of Boston, Massachusetts, became addicted to heroin in college. In a compelling segment of the series, correspondent DeMarco Morgan follows Jason as he enters a rehab center in New Jersey. At intake, Jason gives the admissions counselor all the prescription drugs in his possession and admits that he does not know how to be drug-free and cope with the demands of life.

At the 24-hour detox mark, Jason is feeling withdrawal symptoms and crying intensely after learning his younger brother has had a heroin relapse. The next day, Jason is immersed in release work during a therapy session. Later that day, he is seen exercising and doing yoga with a staff trainer. As Morgan explains, Jason’s medical detox from heroin spanned a total of seven days, and he was provided with opioid replacement therapy. Flash forward six months, and Morgan visits Jason and learns he has maintained abstinence. As Morgan reports, Jason’s story encouraged some program viewers to enter rehab. Jason is grateful that his struggles with addiction have helped others and never believed he’d be such an inspiration.
Like Jason, in the first 24-48 hours, a new rehab client can expect the following:

The first 24-48 hours of admission to a rehab program are critical.

In addition to gathering information, the addiction treatment team must construct a care plan. Depending on the type of drug of abuse, detox may include addiction medications. Known as medication-assisted treatment (MAT), this pharmacology-based approach is usually reserved for recovery from opioids, benzodiazepines, and alcohol. In some instances, a client is initiated into the substitution medication in the first 24-48 hours. In other instances, the initiation happens later. There are well-established, evidence-backed guidelines for initiation into MAT medications.

For clients who are detoxing without addiction medication, the attending physician and medical staff may be able to make the process more comfortable by providing over-the-counter medications or nonaddictive prescription medications, such as muscle relaxers to treat abdominal cramps. Counseling may also be available during this time if it is considered beneficial.

Each drug of abuse has a different withdrawal timeline, and even still, the process depends on the client’s physiology and particular abuse history. Withdrawal symptoms may peak during days three, four, or five. Since detox is supervised, the attending doctor and medical staff will make treatment adjustments and optimize the process for comfort.

As the withdrawal symptoms subside, the client is in a good position to engage in other recovery services, such as counseling, exercise, walks around the grounds, or yoga. This may also be a good time to build up wellness through proper nutrition. From the beginning of detox, the client’s health status permitting, rehab centers provide nutritious meals that are designed to support recovery. Nourishment and hydration are key during this phase and can help the body to recover from damage caused by the drug abuse.

Withdrawal symptoms are now likely to be manageable to the point where the recovering person can fully integrate into all the support services available at the rehab center.

The physically intense part of recovery may be subsidizing, and treatment can turn more fully to addressing the psychological aspects of addiction.

Most all rehab centers will provide the following recovery services at, or soon after, this point in treatment:

As each day passes in rehab, recovering individuals are strengthening their footing in a drug-free body, mind, and lifestyle. In this way, a recovery programnot only helps individuals to detoxify but effectively trains them to maintain abstinence from the inside out. To revisit Jason’s story, the first day of detoxification may be emotional and intense, but it represents the start of a new beginning.

detoxtreatment
Get the Info & Help You NeedWe're open across the US. Learn about your options.