Tapering: Is It Effective? 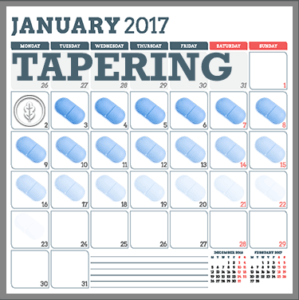 Addictive drugs commonly interact with brain chemistry and change the way the brain sends signals along the central nervous system. When a person uses drugs on a regular basis, the brain’s chemical makeup, circuitry, and wiring can be altered. With chronic use, these changes can become somewhat fixed, and levels of some of the brain’s chemical messengers, like dopamine, serotonin, and GABA (gamma-aminobutyric acid) are disrupted. These neurotransmitters are responsible for helping to regulate emotions, the stress response, memory and learning, and sleep functions. When a person becomes dependent on a drug that affects these naturally occurring brain chemicals, difficult withdrawal symptoms can arise when these drugs stop being active in the bloodstream, or when they wear off.

Drugs like opioids (prescription painkillers and heroin), benzodiazepines (prescription sedatives and tranquilizers), and alcohol are substances that should never be stopped suddenly, as withdrawal side effects can be severe and even possibly life-threatening, Psychology Today warns. Instead, these drugs are often tapered off slowly over a period of time set by trained professionals.

Tapering a drug down means slowly lowering the dosage, or weaning a person off the drug, in a controlled fashion. In this manner, the brain continues to be activated by these drugs, keeping withdrawal symptoms from becoming as intense. The dose of the drug can be gradually lessened a little each day in order to avoid shocking the brain and central nervous system by stopping these drugs cold turkey. The brain is then allowed to slowly restore and rebalance itself to how it functioned before the drugs were introduced, instead of trying to accomplish this all at once. Stability is regained little by little, as the brain will require less and less of the drug every day. Over time, the brain will start to produce, absorb, and transmit chemical messengers more and more on its own in a normal manner.

During a tapering regimen, several different agents may be used such as:

During opioid detox and treatment for opioid dependence, for example, a short-acting drug like fentanyl may be replaced with a long-acting opioid like methadone, the journal Pain-Treatment Topics publishes. Drugs with longer half-lives stay active in the bloodstream longer, meaning that a person will need fewer doses less often. Partial agonists, like buprenorphine, are also effective during a taper, as they can serve to activate opioid receptors in the brain like a full agonist but not to the same extent, meaning that withdrawal symptoms may be successfully managed and controlled without inducing a high. In the case of alcohol withdrawal, benzodiazepines are often used to replace alcohol during a taper, as these drugs function on the brain in a similar fashion to alcohol.

Adjunct medications and therapies are also useful during withdrawal and tapering to control specific side effects, like nausea, depression, and insomnia. Tapering drugs down slowly can keep the brain from experiencing a potentially dangerous rebound effect by helping individuals to better manage withdrawal symptoms and drug cravings during detox. Tapering may also decrease the instance and severity of relapse by helping a person to reach a stable physical level, so the focus can shift to behavioral and therapeutic methods to build a strong foundation for a lasting recovery.