In the United States, there were close to 207 million prescriptions issued for opioids in 2013, according to the National Institute on Drug Abuse, and the overprescription of these drugs has contributed to the opioid abuse epidemic going on in the US. Nearly 304,000 people received emergency treatment for nonmedical use of opioid analgesics in 2008.

Opiates can lead to physical dependency with long-term use. First, a person develops tolerance, needing a higher dosage of the drug to get the desired effect, and then, they experience uncomfortable withdrawal symptoms if they stop taking the opiate drug.

Clonidine, along with other medications, is sometimes used during opiate withdrawal to relieve withdrawal symptoms and facilitate the overall detox process. 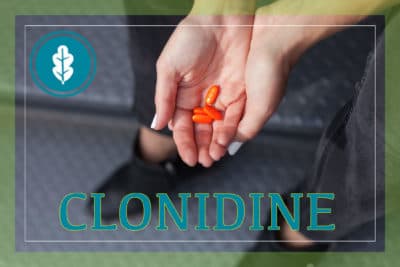 According to the U.S. National Library of Medicine, clonidine is used to control high blood pressure, attention deficit hyperactivity disorder, Tourette’s syndrome, and menstrual cramps. It is part of a subset of medications known as centrally acting alpha-agonist hypotensive agents. Blood pressure is lowered by reducing heart rate and relaxing the blood vessels.

In cases of opiate withdrawal, clonidine can reduce feelings of anxiety and agitation. It also alleviates muscle aches, cramping, and runny nose as well as sweating. Clonidine is not a narcotic, and it does not reduce opiate cravings. It works by reducing noradrenergic hyperactivity that coincides with opiate withdrawal. The benefit of using this medication is that an individual won’t develop a tolerance to or dependence on it, though it may temporarily aid the withdrawal process.

According to “Opioid Dependence Treatment and Guidelines,” a 2010 article in the Journal of Managed Care Pharmacy, clonidine used to be administered along with naltrexone, which could trigger abrupt withdrawal symptoms. The combination was sometimes used for rapid withdrawal from opioids. Clonidine was administered first to avoid these symptoms, and then naltrexone, a medication that can help prevent relapse, would be administered. This process was typically done in an inpatient setting, where an individual could be closely monitored by physicians. While some facilities may still use this practice, “rapid detox” or “ultra-rapid detox” practices are not recommended due to the high risks associated with them.
Generally, clonidine is used during opiate detox under direct medical supervision to soothe and expedite the withdrawal process. Studies have shown that clonidine can help facilitate withdrawal that takes fewer than 14 days.

Side Effects of Clonidine

Clonidine can cause side effects in users. If they persist or become severe, a physician should be consulted right away. Since those going through opiate withdrawal will likely be undergoing medical detox, medical professionals will be on hand to intervene if side effects occur.

Side effects include dry mouth, weakness, headache, tiredness, nervousness, nausea, vomiting, and constipation. Emergency medical treatment is required if one experiences a rash, hives, or has difficulty swallowing or breathing after taking clonidine. Severe reactions include swelling of the throat, tongue, lips, face, eyes, feet, ankles, or lower legs. Side effects can be enhanced if a person consumes alcohol while taking this medication.

An overdose of clonidine includes more severe reactions, such as fainting, labored breathing, and a slow heart rate. If a person overdoses on the drug, they may shiver, be confused, or exhibit slurred speech. Cold and pale skin, drowsiness, and small pupils are additional signs of overdose.

Even without overdose, a person’s reaction to clonidine can be unpredictable, which is why doctors recommend periodic checks of the person’s blood pressure and pulse to measure their response to the drug. Clonidine can also interact with various medications, vitamins, minerals, and supplements. Again, continued medical supervision is advised while taking the medication.

Proper Use of Clonidine

The medication can be taken orally, or it can be injected or absorbed through the skin, according to the National Center for Biotechnology Information. An extended-release tablet or liquid medication form can be swallowed. Sometimes, it is administered via an injection into the spine to treat pain. It may also be provided in the form of a skin patch. In this case, the medication is delivered transdermally, and the patch is left on for seven days.

It’s not recommended to take clonidine if one has heart or kidney disease. Adverse reactions can occur if the medication is combined with antidepressants, beta blockers, calcium channel blockers, or anxiety medications. Women who are pregnant or breastfeeding are generally not advised to use clonidine.

A dose of 0.1-0.3 mg is the typical oral dose of clonidine used for opioid withdrawal, and an individual will receive this dose every six hours.

Clonidine is not always the medication of choice during withdrawal because it can lower blood pressure to undesirable levels and act as a sedative. An individual shouldn’t be given more than a three-day supply unless they are being treated at a medical facility.

We are here to help you get clean and learn how to stay that way. Retreat to the sunny climate of Tampa, Florida for a stay at the gold standard of treatment facilities. We offer customized care plans to help you on your recovery journey.

We're available 24/7 to answer questions and help you make decisions about starting recovery from drug use.

Get Help for Addiction during Coronavirus