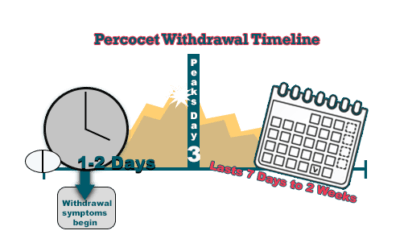 Percocet is a prescription medication that contains oxycodone and paracetamol. Oxycodone is an opiate analgesic used to treat moderate to severe pain. This medication can be used as needed or given in an extended-release tablet if long-term pain management is necessary. Oxycodone relieves pain by changing how the brain and central nervous system respond to pain signals. Many people use oxycodone without suffering any ill effects, but some people become physically dependent on the drug and then develop an addiction.

Physical dependence is a result of repeated exposure to a substance. The body becomes accustomed to the presence of the drug and begins to require the substance in order to function normally. Opiates like oxycodone have a high abuse potential, and dependence on these substances can develop very quickly. Some people become dependent on oxycodone after using the drug for legitimate purposes but do not necessary develop an addiction. Addiction is a disorder in which an individual repeatedly seeks out and uses the drug despite negative consequences.

Withdrawal occurs as a result of physical dependence. The symptoms of Percocet withdrawal result from lessening or stopping use of the drug. As an opiate, medical detox is generally recommended for Percocet withdrawal, to ensure individuals are safe and comfortable throughout the process and to decrease the likelihood of relapse.

In addition, Percocet withdrawal timelines are affected by individual factors, such as the person’s physical makeup, mental health status, any co-occurring medical issues, and history of substance abuse.

Despite this variation in individual withdrawal processes, Percocet withdrawal generally takes 5-10 days; though some symptoms may continue for weeks and months following cessation of use. In cases of medication management, the full withdrawal process may take months or even years as the person is slowly weaned off the replacement medication over an extended period of time.

Common side effects of oxycodone, the primary drug in Percocet, include:

Increased doses of oxycodone can cause more serious effects. Misusing the drug, such as dissolving tablets in water and injecting the solution or snorting crushed tablets, also increases the likelihood of negative side effects.
More serious side effects of oxycodone include:

Overdose occurs when the body cannot process the amount of the drug that’s been taken.

Symptoms of overdose include:

Percocet contains both oxycodone and paracetamol, but only oxycodone causes withdrawal symptoms. Oxycodone withdrawal syndrome is similar to that experienced from other opiates. White opiate withdrawal is very unpleasant, it is not usually dangerous, and it rarely results in medical complications.

The beginning symptoms of oxycodone withdrawal include:

Symptoms can become more severe as the withdrawal syndrome progresses. Later symptoms of oxycodone withdrawal include:

Symptoms typically appear 1-2 days after the last use of Percocet. The acute physical symptoms last from several days to two weeks.

Withdrawal often results in psychological symptoms, such as changes in mood and anxiety levels. These symptoms, as well as drug cravings, can remain for several months.

Detox is the process through which the body rids itself of addictive substances.

When going through withdrawal from Percocet, pharmacotherapy is typically used. Various medications can be used to treat the symptoms of oxycodone withdrawal. The most common method of medical detox uses opioid agonists, which are medications that mimic the effects of opiates.

Methadone is the most commonly used opioid agonist. This medication is given in frequent doses to replace the drug of abuse, and it is then tapered until it is no longer needed. By mimicking the effects of opiates, methadone relieves symptoms of withdrawal and prevents cravings. Methadone is sometimes used only during the detox process, but some people use it as a maintenance medication throughout the addiction recovery process.

Buprenorphine is used in a similar way to methadone, but it is a partial opioid agonist, so it mimics only some of the effects of oxycodone. This helps prevent the drug from being abused, because increased dosages of the drug do not cause the “high” experienced when abusing other drugs. 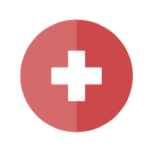 Withdrawal from Percocet is often the beginning of the recovery process in opiate addiction. Additional treatment beyond detox is needed in order to overcome addiction. Long-term therapy and medication is often the most effective means of overcoming Percocet addiction. An effective detox program will offer avenues through which you can find the right treatment program for your individual needs.

prescriptionwithdrawal
Get the Info & Help You NeedWe're open across the US. Learn about your options.