Signs of a Valium Overdose 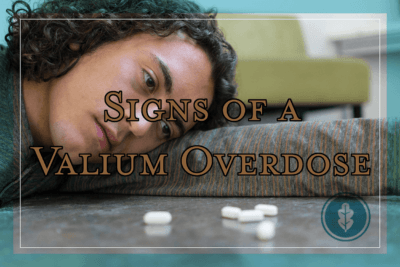 Valium is the brand name of famous, long-acting benzodiazepine, diazepam. This medication, like other benzodiazepines, was created to ease anxiety and treat panic disorders, and it can also be used to treat obsessive-compulsive disorder (OCD). It is sometimes also used to treat alcohol withdrawal and prevent delirium tremens.

Valium was approved for prescription use by the Food and Drug Administration (FDA) in 1963. Although there are other benzodiazepines that are more popular today, diazepam is still sometimes prescribed. It has also become a drug of abuse since the 1960s and has led to several overdoses and deaths, especially when combined with other medications. The problem of benzodiazepine abuse is sometimes called a “shadow epidemic,” as the drugs are more frequently abused in combination with opioids or alcohol.

According to the Centers for Disease Control and Prevention (CDC), 31 percent of the 23,000 overdose deaths from prescription drugs in 2013 involved benzodiazepines. A study published in the American Journal of Public Health (AJPH) found that people between the ages of 18 and 64 were the most likely to overdose on benzodiazepines, either alone or in combination with other drugs. The study suggested that many of these overdoses may be accidental – people drinking too much while taking prescription Valium, for example, or taking an opioid painkiller and a benzodiazepine to ease pain and anxiety at the same time. Additional research shows that 75 percent of benzodiazepine overdose deaths involve prescription opioid painkillers.

Although overdose deaths involving Valium and other benzodiazepines have been leveling off since 2010, some groups, like adults over the age of 65, African Americans, and Hispanics, are still at greater risk of struggling with this kind of overdose. Elderly adults are more sensitive to potent prescription drugs, and they are also more likely to have multiple prescriptions that can become toxic when combined. Changes in non-white groups may reflect changes in socioeconomic status, access to healthcare, or doctors’ prescribing practices.

When a person is overdosing on a benzodiazepine like Valium, symptoms may include:

It is extremely important to get help for a person experiencing an overdose. Call 911 immediately. While waiting for emergency medical services, do not leave the person alone and make sure they do not consume any more drugs.

Mixing Valium and Other Drugs

When a person mixes Valium with other drugs, whether on purpose or by accident, the risk of overdosing increases as does the risk of harmful side effects. For example, mixing alcohol and Valium can lead to respiratory arrest since alcohol and benzodiazepines both affect GABA receptors, which can affect one’s breathing rate. Both Valium and alcohol are metabolized by the liver; Valium can build up to toxic levels in the body if the liver has suffered damage, and the drug can also increase the effects of alcohol, including liver toxicity. The combination can also damage the central nervous system, causing damage to cognition and memory.

People often abuse benzodiazepines to enhance the effects of CNS depressants like opioids or alcohol, but they can also be abused to ease the negative effects of stimulants. People who struggle with cocaine addiction may take Valium or another benzodiazepine to ease anxiety and shakiness associated with taking substantial amounts of this potent stimulant drug.

The body rapidly becomes dependent on benzodiazepines like Valium to regulate brain chemistry, which is why these medications are rarely prescribed for longer than a two-week time period. People who have a tough time ending their prescription to Valium, or who abuse Valium without a prescription, need help to overcome addiction immediately. Taking too much Valium can lead to an overdose, and abusing the drug in combination with other drugs can lead to serious health consequences, both acute and chronic.