Fixing Stimulant Psychosis: What Should You Do?

Psychosis is a term applied to a specific group of symptoms that indicate a person has lost contact with the real world. It is not a diagnosis in itself. Numerous different types of disorders are associated with the development of psychosis.

Delusions refer to very rigid and fixed beliefs that are most likely not true. In some cases, there may be some truth to delusions, but they become so exaggerated that they are unrealistic. For example, somebody with a somatic delusion may actually have some type of physical condition (see below), but the delusion exaggerates any real condition significantly.

There are a number of different categories of delusions.

Very often, people experiencing any form of psychosis are not aware that these beliefs or sensations are not real. This even occurs in individuals who are using drugs, although in some individuals, there may be a period where the person recognizes that voices, visions, or beliefs are the result of their drug-related activity.

APA reports that the overall prevalence of substance/medication-induced psychotic disorder is not actually known, but it is estimated that between 7% and 25% of individuals who present with psychosis have the disorder.

When the person is not able to ascertain that their psychotic experiences are due to their drug use, they would be diagnosed with a substance/medication-induced psychotic disorder. The features of this disorder include having hallucinations and/or delusions, experiencing symptoms either during the intoxication or withdrawal phase of the stimulant abuse, and that the symptoms are not due to some other conditions, such as another medical disorder or psychiatric condition (e.g., schizophrenia).

Research studies have suggested that the prevalence of psychosis symptoms induced by the use of stimulant drugs may be as high as 50% in individuals who take stimulants recreationally or even for medicinal purposes.

What Substances Cause Stimulant-Induced Psychosis? 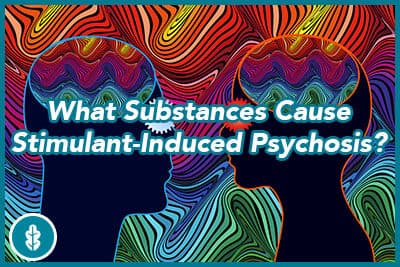 The use and abuse of stimulant drugs is known to have the potential to induce psychosis in individuals. The psychosis associated with the use of stimulants like amphetamine has served as a model for understanding severe psychotic disorders, such as schizophrenia. There may be some slight variation in the types of psychotic symptoms that are more commonly produced by different substances, but all stimulants are capable of producing psychotic effects that include issues with hallucinations, delusions, mania, acting erratically, and aggressiveness.

Some of the most common stimulant drugs that produce psychosis are outlined below:

For many years, it was believed that the primary cause of any form of psychosis was related to increased levels of dopamine in the brain. Most of the evidence for the dopamine hypothesis of psychosis came from treating schizophrenia with drugs that decreased levels of dopamine in the brain and treating Parkinson’s disease with drugs that increase these levels, resulting in individuals developing hallucinations and/or delusions. However, as it turns out, other neurotransmitters may also be involved in psychosis, including serotonin and acetylcholine. Formal treatment of any form of psychosis now addresses numerous different neurotransmitters.

When a person who has been using stimulants begins to experience psychotic symptoms, such as visual or auditory hallucinations, delusional thoughts, manic behavior, and aggression, and they recognize that these symptoms are the result of their use of drugs, they should take the following steps:

One should never attempt to self-medicate by using other drugs, such as alcohol or other types of central nervous system depressants, in order to counteract the effects of stimulants. In addition, the experience of psychotic symptoms as a result of stimulant use is serious, and professional help is needed.

Although the development of psychotic-like symptoms as a result of recreational use of any stimulant drug is not a formal diagnostic sign of a stimulant use disorder, it is very likely that anyone who develops psychotic symptoms has been using dangerously high amounts of the drug, been using it for significant length of time, or both. Individuals who mix other drugs with stimulants are likely to experience psychotic effects, and polysubstance abuse is extremely serious.

Formal treatment for drug-induced psychosis is the use of antipsychotic medications. Physicians will attempt to use an antipsychotic that addresses the particular neurotransmitter the stimulant is acting on, such as dopamine. Physicians will also attempt to give fluids, lower body temperature, control blood pressure, reduce stimulation, and let the person’s natural detoxification process eliminate the drug. Most stimulants are eliminated from an individual’s system due to the normal detoxification process rather quickly. After this occurs, participation in an evidence-based rehab program is recommended.

co-occurring disorderspsychosis
Prefer getting help via text?
We're available 24/7 via text message. Signup below for access to our team when its convenient for you!
and many more...
✕
Instantly Check Your Insurance Coverage
Your information is safe & secure
At River Oaks, we accept most types of private (non-government) insurance and offer a variety of payment options.
You can quickly and privately check your insurance benefits to see if you're covered for addiction treatment services. We’ll be able to tell you if your provider is in network with River Oaks Treatment Center and all American Addiction Centers locations.
This means your treatment may be FREE1 depending on your policy, copay, and deductible.
Your Next StepsRecovery can start today. We are here 24/7.