Spending Money on Pills: How Much Indicates a Problem? 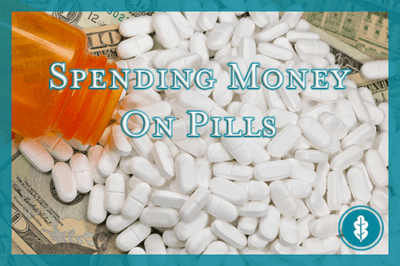 There are many signs of addiction, such as poor hygiene, appearing intoxicated, sleeping odd hours, drug paraphernalia around the home, changes to eating habits or social outings, and refusing to go to work or school. For many people struggling with drug addiction, though, the substance they abuse costs a lot of money. Whether they abuse illicit drugs like heroin or crack cocaine, or find alternative sources for prescription drugs like oxycodone or Adderall, acquiring drugs in large amounts to abuse them is expensive.

In part, this is because drug dealers know they can charge a lot of money. People struggling with addiction suffer from a chronic illness, and one of the signs of this illness is compulsive behavior. Finding a way to get a supply of drugs is a compulsion, which the person cannot control. They will do anything to acquire the substance, including running up massive amounts of debt, pulling all their money out of savings, and maybe even getting a second mortgage or selling a car.

Of course, illicit drugs will be expensive upfront. The more financially insidious addictions are to pills – prescription drugs with refills that insurance will cover at first. However, many drugs like oxycodone and hydrocodone are tightly regulated, so getting frequent refills for “lost” prescriptions becomes hard. The prescribing physician may notice the addiction before their patient does and stop prescribing the drug. Other signs of addiction include doctor shopping, getting multiple prescriptions, lying about symptoms, and stealing the drug or money for the drug from loved ones.

Asking for money is one frequently noted sign of addiction. A person who repeatedly asks for money, with a new excuse every time but no sign of improvement, may be spending that money on a substance they are abusing.

The Financial Cost of Addiction

A Vice article illustrates how devastating the financial cost of addiction and drug abuse can be. Cocaine, in 2015, was $60 per day with people spending thousands of dollars every day to ensure they had enough of the drug to feel normal. Fake or illicit versions of prescription opioids were $3 per pill with at least $75 per day being spent on a small supply. Heroin can cost as much as $220 per gram. Even legal drugs like alcohol can be expensive when someone drinks a handle of whiskey or a bottle of wine per day.

Spending any money compulsively highlights an underlying problem. While people can spend a copay on pills and stop taking them when needed, spending any money on pills without a doctor’s permission or insurance coverage may indicate an addiction, especially if it happens repeatedly. The uncontrollable need to buy pills and finding destructive ways of getting money also show that someone may suffer from an addiction. Likely, before their financial crisis is discovered, they will show other behavioral changes, like quitting hobbies, avoiding social events, appearing intoxicated, incurring injuries from falling or getting into an accident, failing to meet obligations, not getting enough rest, and much more. Eventually, health problems will worsen, and the person is likely to end up in jail for driving while intoxicated, trying to illicitly purchase or steal drugs, or something worse.

If a legitimate prescription is not involved, spending money on pills is harmful. Get help to safely detox from the drug and then get professional addiction treatment to leave substance abuse in the past.