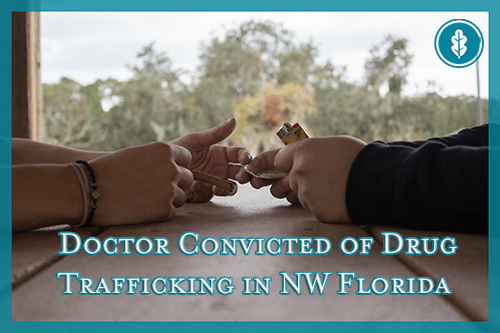 A former physician in Northwest Florida was recently convicted for being the principal in an ongoing drug trafficking and fraud conspiracy that put almost 50,000 pills on the street in just six months. According to court documents and police reports, the doctor was convicted of selling prescriptions for oxycodone and hydrocodone to those who used them to maintain their addictions or who sold the pills on the street. At $200 for a prescription of 90 pills, many found this preferable to purchasing a single pill on the street for $60-$90 each or buying heroin of questionable content.

According to testimonies from former clients, the former doctor would write prescriptions in exchange for money or new clients. In some cases, clients reported that they snorted or injected the drugs in front of him, no medical assessment was done at all to justify such heavy prescriptions, and some received prescriptions for both benzodiazepines and opiate drugs that, if they were taken as prescribed, would have resulted in fatal overdose.

Court records state: “Expert testimony from Dr. Reuben Hoch revealed that a review of the medical files of David Flick showed that the doctor was ‘grossly inadequate’ in both his record keeping and in the practice of pain management. Dr. Hoch detailed many troubling details regarding the review of the files and stated that David Flick had been regularly prescribing patients a prescription combination of opioids and benzodiazepines, a potentially lethal cocktail of substances, that could have led to the patient’s death if taken as prescribed.”

It was also reported that he was aware that his clients were selling the drugs they procured through his prescriptions, and the former doctor required them to give some of the fraudulent pills to his live-in girlfriend as part of the transaction.

For families in Florida with a loved one in crisis due to addiction, there is one less person in the state seeking to put pills into the hands of people who are struggling.

From Prescription Pills to Heroin

Unfortunately, a number of the people who testified against the former doctor stated that the easy access to these drugs fueled their addictions. Now, in the gap left by his arrest and imprisonment, there are a number of addicts in Northwest Florida who are living with a significant opiate addiction that can no longer be sustained affordably with prescription pills. For these people, there are two options: go to treatment and get help or begin using heroin.

It is not an uncommon situation. For so many, the journey into opiate addiction starts with a legitimate prescription, continues with abuse of prescription pills, and amplifies with use of heroin – a drug that is far cheaper and far easier to attain. However, more and more frequently, batches of heroin sold on the street are laced with fentanyl, a potent synthetic opiate that is up to 50 times stronger than heroin itself. It is impossible to know just by looking at it if a bag of heroin contains fentanyl and if so how much; thus, every single use of the drug is a huge risk that can be fatal.

Imprisonment and/or overdose are very often the result of untreated addiction. Because every use of these drugs is a gamble, there is no way to know which way the path in front of you will unfold. The best way to ensure a positive outcome and avoid both incarceration and death due to overdose is to choose to enroll in treatment.

A comprehensive addiction treatment program can provide the medical and psychological care necessary to:

If your loved one is living with an active addiction, the time to connect with a treatment is now. Are you ready to take the first step?