For those interested in staying out of jail on drug-related charges, it may be a good idea to avoid donuts as well as any use of actual drugs – that is, if you find a moral to a story that recently played out to its conclusion in Florida.

It all started one night when a retired man in Orlando named Daniel Rushing decided to buy some donuts. It was a Wednesday night, and it was his habit to buy one Krispy Kreme donut every other Wednesday. Rather than wait to indulge his sweet tooth when he arrived home, he opted to sit and eat the treat in his car. Unfortunately, for him, he was not fastidiously neat in this process and a few flakes of glaze landed on the floor boards and stayed there unnoticed.

Fast-forward a few days to Rushing going by a 7-Eleven to pick up a friend who worked at the convenience store to give her a lift home. It was here that he was pulled over by officers staking out the convenience store after complaints of drug-related activity at that location. One officer asked him to exit the vehicle and noticed what he described as a “rock like substance” on the floor board. At first, they thought it was crack cocaine. Then they decided it was crystal meth. 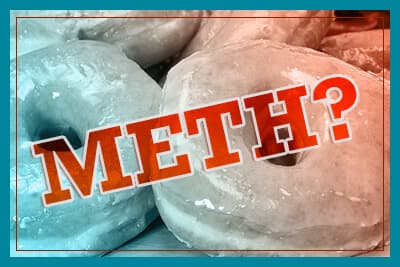 Despite Rushing’s insistence that it was in fact glaze from a donut and not a drug of any kind, the law enforcement officers persisted and tested the glaze in the field. According to Rushing’s arrest report, not one but two roadside drug tests came back as positive as an illicit substance. He was then arrested, strip searched at the county jail, and booked for possession of methamphetamine. To make matters worse, he was legally in possession of a firearm at the same time, but in combination with the supposed methamphetamine, that became an arrest charge as well. After a $2,500 bond was paid , he was released.

It took a number of weeks for the test results to come back from the state crime lab: negative. Rushing was then cleared.

The problem is not necessarily anything that the officers did or did not do. They were reacting to a call about drug-related behavior. They saw what they thought was an illicit substance and tested it with the tools they had, and those tools told them that their guess was right.

The problem is with the tools used to do those roadside drug tests. The Orlando Sentinel interviewed the police department after this story broke and asked them how often it happens that roadside drug tests come back with false positives as in Daniel Rushing’s case. They responded: “At this time, we have no responsive records … There is no mechanism in place for easily tracking the number of, or results of, field drug testing.”

Even The New York Times found that false positives given by roadside drug tests are a rampant problem. According to their report, roadside drug tests analyzed at the Florida Department of Law Enforcement Lab was wrong about 21 percent of the time, wrongly identifying a substance as methamphetamine. About 50 percent of those wrong identifications turned out to not be a drug at all.

When this happens, most people are so relieved that they simply walk away, irritated by being wrongly arrested but glad that at least the state crime lab was able to correctly identify the substance or at least uncover the fact that it was misidentified at the time of arrest. But not Daniel Rushing. He is sharing his story far and wide. He is now looking to sue for wrongful arrest and to trigger some changes that will help others to avoid having a similar experience.

Do you think that the law enforcement officers in question, the Orlando Police Department, or whichever state authority chose to implement the use of those roadside drug tests should be convicted of a crime due to cases like Daniel Rushing’s? How do you think that the Orlando Police Department and/or state government should respond in this situation?