Drug Abuse by the Numbers: Statistics on Abuse

Drug abuse is a worldwide epidemic. At present, global reports on drug abuse highlight that the US is associated with the highest rate of prescription pill abuse (e.g., opioids, tranquilizers, and stimulants).1 Within the US, prescription drugs rank third in terms of abuse, behind alcohol and marijuana (in first and second place respectively).2

To consider the extent of the drug problem in the US, it is useful to see its rankings on specific drugs of abuse. The following is selected information about US rates of abuse by drug type:

These comparative statistics lead to an important deduction: The US has made the top 10 list of drug abuse levels for all drugs studied with the exception of heroin. It’s not that the US doesn’t have a serious heroin problem, it’s just that other countries are facing an even deeper heroin problem. Researchers consider the US to be currently experiencing a heroin epidemic.

Though the US maintains its position as a world leader on politics and economics, the country is by no means a role model for abstinence. But the US is not alone; according to one study, richer nations tend to have the worst drug problems.4 The good news, however, is that wealthier nations like the US have the resources to offer drug treatment services to those in need.

Drug Use Rates in the US 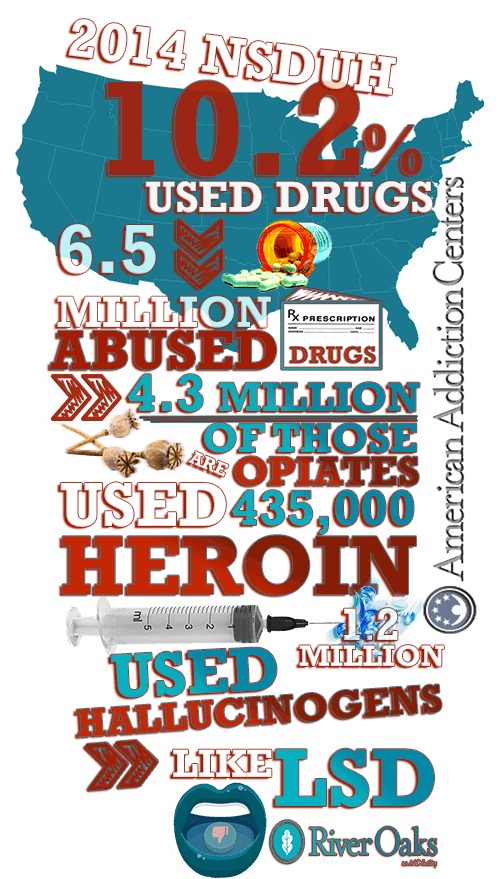 Statistics are not embodied; they don’t attach faces and bodies to numbers. To really appreciate the magnitude of drug use in America, consider three visual examples. Per the 2014 NSDUH results, the number of people who use heroin would fill nearly five times the capacity of Ben Hill Griffin Stadium in Gainesville, Florida. Let’s go to New York City now. There are 102 floors in the Empire State Building. Imagine about 42,156 people on each floor of the Empire State Building. That’s the number of individuals who misused prescription opioids in 2014. Going all the way west now, picture the University of California at Berkeley student body 718 times over (the school had 37,581 students in 2014). That’s the number of people who were estimated to be currently using an illicit drug.

Prevalence of Substance Use Disorders in the US

To receive a mild diagnosis, a person typically has to have 2-3 symptoms out of potential 11 symptoms. In other words, the more symptoms that are present, the higher the severity of the substance use disorder.7 The 2014 NSDUH asked a sample of the population aged 12 or older about their substance use practices to determine if a substance use disorder was present. The 2014 NSDUH results provide the following insights, all of which pertain to the 12-or-older age group and reflect information about the past year:

Drunk and Drugged Driving: The Numbers

Much of the discussion about drug abuse, in general, pertains to its impact on a person’s health, but drugs also have an impact on a person’s behavior. For example, drugs impair a person’s ability to operate machinery, perform basic tasks, and drive a car. But drugs can actually change a person’s brain and tell them that they can do anything, including driving while under the influence. In other words, drugs cause a person to lose perspective on their ability to drive and may even encourage them to drive, with potentially devastating consequences. The National Institute on Drug Abuse (NIDA) provides the following illuminating
facts on drunk or drugged driving in the US:

So far, the statistics discussed mainly relate to crashes and the information that such crashes provides about the driver’s drug use. But not everyone who drives under the influence is detected each time they do so. On average, a person drives drunk over 80 times before being arrested for the first time.12 This statistic highlights the need for drug treatment help or an intervention as soon as drug abuse sets in. It means that each fatal and nonfatal crash is likely to be preventable because it’s probably not the first time the driver used alcohol or other drugs before driving. Armed with the foregoing statistics, it is hopefully easier for a person to be even more vigilant about their own alcohol and drug use and that of others in relation to driving. Total abstinence is truly the only safe policy when it comes to alcohol, other drugs, and driving. 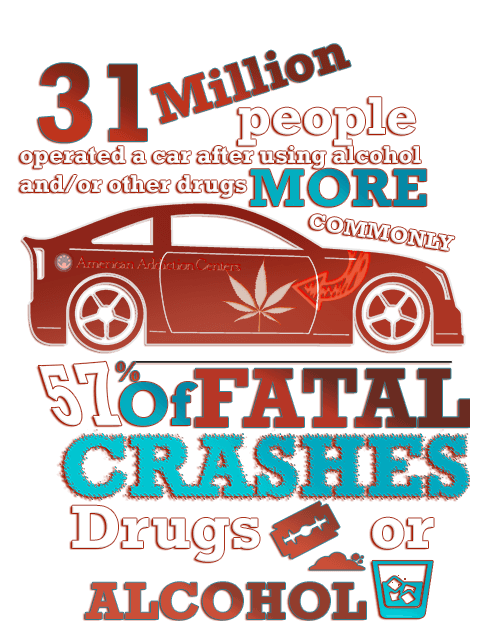 Mothers Against Drunk Driving (MADD) is one of the most vocal and well-known organizations dedicated to educating the public on the perils of driving under the influence. The organization was founded by a mother who lost her child to drunk driving and then transformed her grief into a mission to help save lives.10 As part of its education and advocacy, MADD collects different findings from various local and nationwide surveys. The following statistics and facts shed light on the reality of driving under the influence in the US: 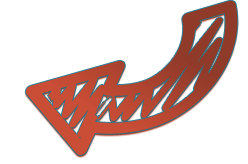 Stated most broadly, an overdose occurs when people consumes too high a volume of a drug for their physiological makeup. Individuals who use illicit drugs or abuse prescription medications, mix drugs with alcohol or other drugs, have a mental health disorder, or have overdosed in the past face a heightened risk of overdose.13 It is difficult to generalize about what causes an overdose, so it’s best to consider an example. Opioid prescription medications and heroin directly affect the area of the brain that regulates breathing. As a result, the consumption of an excessive amount of this drug type can result in respiratory depression and even death. There will typically be visible signs, such as slowed breathing, pinpoint pupils, and unconsciousness. In 2010, there were approximately 16,651 overdose deaths that involved prescription opioids and 3,036 that involved heroin.14

The National Institute on Drug Abuse publishes statistical data on overdose deaths involving some of the most common illicit drugs.15 The following findings relate to survey years 2001-2014:

Though there has been a significant increase in the number of heroin-involved deaths, and the US is entrenched in an opioid abuse epidemic, but there is some encouraging news. Today, there is an antidote available for individuals who are experiencing an opioid overdose (e.g., an overdose on heroin, morphine, or prescription pain relievers). Naloxone, an opioid antagonist, can counteract respiration system depression or central nervous system depression. Due to laws around use of naloxone, laypeople can be trained to administer this emergency drug as needed. This antidote to opioids can be sprayed into the overdosing person’s nose or injected into the body.17 The hope is that as long as drug abuse continues, there will come a day that an emergency response medication will be available that can reverse any type of drug overdose.

According to the 2014 National Survey on Drug Use and Health (NSDUH), the number of individuals who seek treatment for drug abuse remains low. The NSDUH for 2014 did not include treatment statistics in its report but published its findings in a separate Substance Abuse and Mental Health Services Administration news update on September 17, 2015. Per that news update:

Some readers may question whether individuals who say they do not seek treatment because of finances are really just making an excuse. This is a complex issue because when people are steeped in drug abuse, they are often motivated both physiologically and socially to protect that drug use, even at risk of experiencing an accident or fatal overdose. But in some instances, fears of the expense of a drug rehab program may be a real barrier to treatment.

The Fix provides information on different facets of drug abuse and recovery, and the articles are often written by people with firsthand experience. According to one article, successfully getting into a treatment program without adequate health insurance or financing can be a real challenge for some.19 For example, individuals who have a criminal record involving a felony may not be eligible for Medicaid or other publically funded programs. Another possibility is that a person may have a co-occurring mental health disorder and substance use disorder, and is unable to find a bed in a rehab center with treatment that accommodates a dual diagnosis.20

Whatever the obstacles, it is important for a person in need of treatment to know that there are professionals who are dedicated to providing help. The following individuals will likely be able to provide guidance: a primary care physician, a psychiatrist, a social worker/case manager, an addiction specialist, a trained interventionist, or an intake counselor or therapist at a local rehab center. Whether individuals set up a rehab treatment admission on their own or with the help of family, friends, or a professional, there are certain elements that will need to be addressed, such as locating an appropriate program, applying for health insurance, or coordinating coverage with a health insurance carrier. Typically, a rehab center can handle all of these matters once their services are engaged.