What Are the Most Addictive Drugs?

Every drug has the potential for addiction as well as its own set of withdrawal symptoms,

but some drugs bring more severe effects than others. Since different drugs affect different parts of the brain and are ingested in different ways, they vary in what effects they have and how quickly those effects kick in after using the drug.

Alcohol may be legal, but that has no bearing on its addictive properties. It works by interacting with the brain’s reward system, causing a feeling of pleasure. However, alcohol abuse and chronic use can cause a multitude of health issues, such as hypertension, heart attacks, stroke, cirrhosis of the liver, pancreatitis, increased risk of certain cancers (mouth, esophagus, throat, liver, and breast cancers especially), and a weakened immune system.

Alcohol use often starts young. In a Monitoring the Future study conducted in 2014, 66 percent of 12th graders interviewed had used alcohol in their lifetime.

Alcohol withdrawal is one of the most severe drug withdrawal experiences. It can begin as early as a couple of hours after the individual’s last drink, and it can last weeks. Alcohol withdrawal can be life-threatening, and it is best if an individual does not quit or reduce alcohol consumption without a doctor’s supervision. Withdrawal symptoms can vary from mild anxiety to delirium tremens (also called DTs, which include confusion, increased heart rate, and a fever) and seizures. If individuals experience even mild symptoms, they should be under medical care.

Symptoms of alcohol poisoning include:

Cocaine, no matter how it is ingested, has a high addiction rate. Smoking or injecting cocaine has a more rapid onset, but snorting it is not too far behind. It too affect dopamine in the brain and cause severe cravings. Crack cocaine is cocaine in its purest form, and when smoked, it reaches the brain faster to cause an immediate and intense high, lasting about 15 minutes. When snorted, cocaine produces a high that lasts anywhere from 15-30 minutes. Either way, cocaine produces euphoria and energy. It is a very powerful stimulant and can cause other effects such as high blood pressure. Individuals can become addicted after their first use of the drug.

In a National Survey on Drug Use and Health, 17.1 percent of interviewees aged 26 or older had used cocaine in their lifetime.

Cocaine withdrawal is sometimes described as having three phases: the crash, withdrawal, and extinction. Phase 1 begins as soon as the individual stops using cocaine heavily. Some of the symptoms in the first phase are anxiety, irritability, exhaustion, and increased appetite. The withdrawal phase is characterized by a largely increased craving for cocaine. It can also include poor concentration and has been reported as lasting up to 10 weeks. When individuals reach the extinction phase, they will experience intermittent cravings.

Symptoms of cocaine overdose include:

Heroin is one of the most addictive drugs, and it is an opioid that is synthesized from morphine (an opioid used for severe pain). It can be ingested in a few different ways, including injection, snorting, or smoking. All routes cause the drug to reach the brain very rapidly and cause intense euphoria or a “rush.” 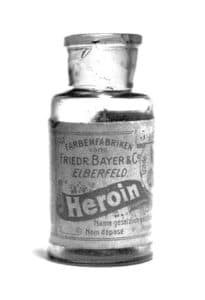 Heroin also works by disrupting the brain’s reward center, and it can eventually, after a period of time, cause the individual to become unable to experience any good feelings unless under the influence of heroin.

It isn’t uncommon for individuals to become addicted after using heroin once or twice.

Heroin can cause many health problems and put individuals at risk for HIV/AIDS and hepatitis B and C. Chronic users can experience issues such as infection in the heart’s lining and/or valves, liver or kidney disease, and complications with breathing. Heroin can cause spontaneous abortion in pregnancy, and it can cause newborns to be born physically dependent on heroin.

Withdrawal from heroin can include such symptoms as cold sweats, depression, anxiety, muscle cramps, nausea and vomiting, and seizures. Unlike withdrawal from alcohol, heroin withdrawal isn’t fatal. However, individuals dealing with the symptoms may attempt to find other drugs – or resort back to heroin – to ease the symptoms, and may unfortunately overdose. The withdrawal symptoms can kick in around 12 hours after the individual last used heroin, and they usually subside after a week.

Some heroin overdose symptoms include:

treatment
Get the Info & Help You NeedWe're open across the US. Learn about your options.