Music while in Recovery 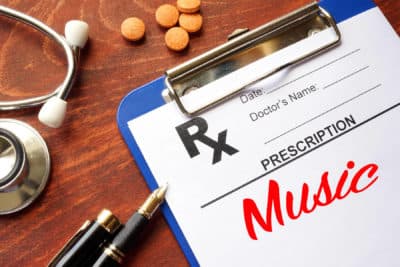 The American Music Therapy Association defines music therapy as the clinical and evidence-based application of music to accomplish individual goals, in a therapeutic relationship with a trained music therapist. This is a form of art therapy, and it is sometimes offered as a complementary or alternative medicine that can be used alongside other traditional types of therapy in rehabilitation programs. While music therapy is not offered alone since it does not focus on understanding and overcoming addiction specifically, it can be a helpful way to relax among people who are working to end their addiction or substance abuse problem. This form of therapy has been applied as a holistic therapy in rehabilitation since the 1970s.

While music therapy includes the structured use of music, individuals in recovery can benefit from simply listening to music on their own. Music can be soothing, inspirational, encouraging, or relaxing, helping those in recovery to meditate, reflect on things in life, or feel motivated to engage in some activity.

While few rehabilitation programs offer music therapy, and it is rarely mandatory, people working to overcome their addictions typically have positive results when they attend music therapy in addition to regular group and individual therapies. Some evidence suggests that those who attend music therapy sessions are better able to identify their feelings and less prone to justify or minimize their reactions. They are less likely to lie about what they feel or have experienced, and they are less likely to deny their condition or blame it on others. Music appears to help people overcoming addiction to better process their feelings and experiences. It also helps them maintain positivity about the future.

A study from the University of Oxford regarding music’s general benefits showed that listening to music, singing, or playing music can all alleviate stress, improve athleticism, and improve the brain’s functions. Listening to music improves blood pressure, breathing, and heart rate. Music, in general, instills a sense of wellbeing by mildly regulating the body’s functions.

Music, like other forms of art, helps humans empathize with each other. Expressions of emotions are at once familiar and unique. When musicians or bands write songs about their own struggles, many people fall in love with these tunes because they identify with some of the painful personal history that is present in the lyrics.

Music can help those in recovery to feel less alone and inspire them to continue their journey.

A lot of popular music glorifies drinking, drug abuse, or dangerous behaviors, but there is also inspiration for recovery found in certain types of music. Several musicians and pop icons have gone through struggles with substance abuse and then recovered. Based on their deeply personal journeys, some of these artists wish to inspire others and have produced songs about their recovery.

Here are a few of the best songs about recovering from addiction:

Listening to music can inspire creativity, make a person feel better, and help someone to stay on track during the recovery process.

Thousands of people in the United States struggle with substance abuse. While too few seek help through rehabilitation programs, popular songs can show listeners that help is available, and recovery is possible.

treatment
Prefer getting help via text?
We're available 24/7 via text message. Signup below for access to our team when its convenient for you!
and many more...
✕
Instantly Check Your Insurance Coverage
Your information is safe & secure
At River Oaks, we accept most types of private (non-government) insurance and offer a variety of payment options.
You can quickly and privately check your insurance benefits to see if you're covered for addiction treatment services. We’ll be able to tell you if your provider is in network with River Oaks Treatment Center and all American Addiction Centers locations.
This means your treatment may be FREE1 depending on your policy, copay, and deductible.
Get the Info & Help You Need