Lack of quality sleep can negatively impact many aspects of a person’s life, making it more difficult to think straight, keep emotions in check, and make intelligent decisions. The Centers for Disease Control and Prevention (CDC) estimates that between 50 and 70 million Americans suffer from a wakefulness or sleep disorder, making insufficient sleep a public health concern.

Inability to fall or stay asleep can be partly the result of brain chemistry. For example, the neurotransmitter gamma-aminobutyric acid (GABA) helps to slow down nerve firings and suppress many of the autonomic responses of the central nervous system, such as respiration, blood pressure, and heart rate. All of these functions are elevated in times of stress and lowered when a person is feeling relaxed. There are several medications that help to increase the presence of GABA in the brain and thus make it easier to sleep.

Flurazepam is a benzodiazepine medication marketed under the brand name Dalmane in capsule form. Flurazepam, and therefore Dalmane, is approved by the US Food and Drug Administration (FDA) to treat insomnia as a sedative-hypnotic benzodiazepine drug.

Benzodiazepine medications are a class of prescription drugs commonly diverted and abused, often leading to drug dependence and addiction. The Drug Enforcement Administration (DEA) estimates that over 20 million people in the United States had abused a benzo at least once in their lives at the time of the 2011 National Survey on Drug Use and Health (NSDUH). The majority of individuals who were currently abusing a sedative drug at the time of the 2014 NSDUH were over the age of 25.

When a prescription drug like flurazepam is used outside of a necessary medical prescription, it is a form of drug abuse. When used in large amounts, or in a manner other than intended (e.g., crushing the pills to snort, smoke, or inject the powder; chewing pills; or otherwise altering the capsules), flurazepam can have mind-altering effects. The mellow “high” caused by flurazepam may make a person feel happy and relaxed, reducing stress and producing a calming effect. Decision-making abilities may be impaired as may motor control, and individuals intoxicated by flurazepam may slur their words or fall down. Benzodiazepines like flurazepam may also be used to facilitate sexual assault, as they decrease inhibitions, impact short-term memory, and have sedative effects.

When used or abused regularly, flurazepam can cause drug tolerance, dependence, and also addiction. Other side effects of flurazepam, as published in the prescription drug labeling information by the FDA, include:

Overdose (when too much flurazepam is taken at once and it overwhelms the body) is also a potentially life-threatening side effect of drug abuse. The National Institute on Drug Abuse (NIDA) reports that more than 8,000 Americans died from a benzodiazepine drug overdose in 2014. Extreme drowsiness; nausea and vomiting; confusion; a bluish tinge to skin, lips, and/or nails; being cold to the touch; lack of muscle control; and loss of consciousness or coma are warning signs of an overdose. Mixing alcohol or other drugs, particularly other central nervous system depressants like opioids, with benzos increases the odds for having an adverse reaction as well as heightens the risk for an overdose.

Another side effect of flurazepam and other insomnia medications is the possibility of engaging in behaviors while technically asleep and not remembering them the next day. People have been known to make themselves food, carry on conversations, make phone calls, have sex, or even get in a car and drive while under the influence of an insomnia treatment medication. The Washington Post reports that Dalmane is one of the medications that may cause “sleep driving,” forcing the FDA to post warnings about this particular side effect in the drug’s labeling information. Another negative side effect of flurazepam may be next-day drowsiness and the mental “fogginess” that may accompany this.

Benzodiazepines Effects on the Brain

In addition to flooding the brain with the naturally occurring sedative GABA, flurazepam also increases the presence of the pleasure-inducing neurotransmitter dopamine. When levels of dopamine are heightened, moods are elevated and the “high” is perpetuated. When someone takes a psychoactive drug like flurazepam, this artificial stimulation of some of the brain’s chemicals responsible for helping to regulate moods promotes happiness, influences willpower, and shortcuts the route to processing rewards.

When the drug is then taken for a length of time, some of the changes in the brain’s circuitry and chemical makeup are therefore altered. Long-term flurazepam use can cause tolerance, wherein the same amount of the drug will no longer be effective, and individuals will need to take more in order to keep feeling the desirable effects, the National Library of Medicine (NLM) warns. The danger of continually increasing dosages is that it can more rapidly lead to drug dependence. 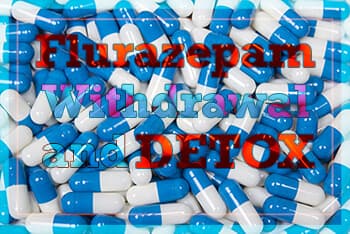 When someone is dependent on flurazepam, the FDA reports that depressed moods, difficulty feeling pleasure, and insomnia are common withdrawal side effects when the drug wears off. More severe withdrawal symptoms are also possible if someone has been using large amounts of flurazepam for a long time, including tremors, depression, anxiety, vomiting and stomach cramps, sweating, irregular heart rate and blood pressure, muscle aches, and even seizures.

Benzodiazepine withdrawal is considered to be dangerous and potentially life-threatening; therefore, it is best managed with professional care and supervision. Flurazepam is often optimally tapered, or slowly weaned, off instead of stopped “cold turkey” after dependence has formed. Medical detox provides a safe environment for removing toxins like flurazepam from the body and often uses medications to smooth out and manage specific withdrawal symptoms.

Flurazepam starts to take effect within a half-hour to an hour of taking it via normal means, and the FDA publishes that its mean half-life is a little over two hours. It is interesting in that the more a person takes it, the longer the drug may remain effective and active in the body. The FDA reports that Dalmane is actually more effective in treating insomnia and promoting a full night of sleep after the second or third night of taking it just before bed.

Flurazepam is considered a long-acting benzodiazepine, and long-term use or abuse can increase the amount of time the drug is active in the bloodstream. Withdrawal symptoms start after a drug’s method of action decreases, and in the case of flurazepam withdrawal, it may start between 12 hours and a few days after the last dose.

The detox timeline generally lasts a few days to a week or 10 days, with some of the psychiatric symptoms, like anxiety, depression, and insomnia, lingering for up to a few weeks or months without proper treatment. During withdrawal, symptoms typically build up in intensity, peaking a few days in and starting to taper off within a week or so. Medical detox can help to alleviate withdrawal symptoms by providing both pharmacologic and supportive care.

While drug dependence is a physical manifestation of continued drug use or abuse, addiction encompasses the emotional, behavioral, social, and physical aspects of a person’s life. When someone is addicted to flurazepam, they are unable to control their drug use. Many unsuccessful attempts to stop taking the drug, coupled with episodes of taking more of it than intended at a time and for longer, are hallmarks of drug addiction. An individual battling addiction may keep taking flurazepam even when they know that it will have negative consequences, and they may take the drug in hazardous situations. A lack of concern over personal appearance, changes in social circles, increased secrecy, mood swings, changes in both appetite levels and sleeping patterns, decreased interest in activities that were previously important, financial strain, possible criminal or legal troubles, and a decline in work or school performance and production are all possible signs of addiction.

Individuals may abuse a drug like flurazepam in order to self-medicate an undiagnosed or co-occurring mental health issue, like insomnia, anxiety, or a mood disorder, and specialized integrated treatment methods can help to manage any potential co-occurring disorders simultaneously. Holistic methods for improving sleep can be helpful too. Long-term recovery for flurazepam addiction can be sustained and maintained with tools, skills, and habits formed in a specialized and individually personalized drug addiction treatment program.

River Oaks, American Addiction Centers’ Tampa rehab center, is ready to help you overcome addiction and find long-term recovery. Call us today at to learn more about our addiction treatment options near you.