The Dangers of Counterfeit Prescription Drugs 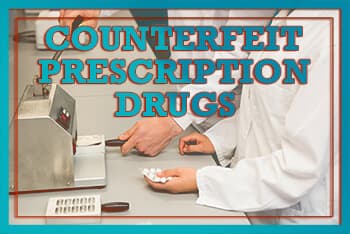 Several different groups of prescription medications are commonly offered on the Internet and through other sources in a counterfeit form. These include:

The Dangers of Counterfeit Prescription Medications

The majority of counterfeit medications are marketed on the Internet and purchased by both consumers and medical professionals. There are numerous examples of issues, contamination, incorrect dosages, or lack of active ingredients with these medications. Serious issues have been reported as a result of these of counterfeit medications, including the development of infections, serious medical conditions, and even death in individuals who use these. Individuals who buy counterfeit prescription medications in an effort to save money should heed the warning “buyer beware.”

How to Identify Counterfeit Prescription Medications

There are a number of steps that consumers can take to reduce the risk of getting counterfeit prescription medications. These include:

It may seem like a lot of work to verify if the medication one is buying online is real or not, but given the potential dangers, it is important to make sure that one is not purchasing a counterfeit medication that may be actually harmful. The safest way to avoid counterfeit medications is to buy medications from legitimate, trusted sellers, such as a local pharmacy that has a registered and licensed pharmacist on staff.