Potentiating Xanax: What Do You Need to Watch Out For? 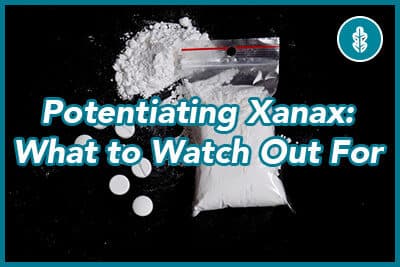 Xanax is primarily prescribed for the treatment of anxiety, and it was intended to replace the more addictive benzodiazepine Valium (diazepam). Xanax can also be used as a muscle relaxant, to assist in anesthesia, as a sleep aid, and even to assist in the prevention of seizures, but its primary use is for the prevention of clinically significant anxiety. This means that it is primarily used to treat anxiety that is associated with anxiety disorders and other psychiatric disorders were anxiety is a significant feature, such as, PTSD.

Xanax is the most frequently prescribed and used benzodiazepine in the United States, according to the Substance Abuse and Mental Health Services Administration (SAMHSA). Xanax and other benzodiazepines are considered to be controlled substances, according to the United States Drug Enforcement Administration (DEA), meaning that their use is only legal when they are prescribed by a physician.

Potentiation and Other Effects

These types of drug interactions are divided into four major groups.

Potentiation and Abuse of Xanax 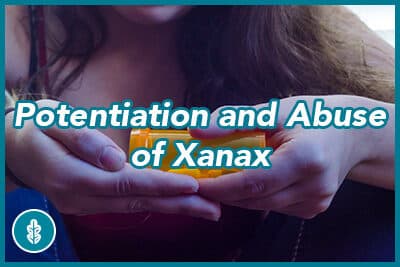 Prescription drug abuse has become a major concern in the United States with 20–25% of Americans over the age of 12 years old admitting to nonmedical use of prescription drugs at least once. Of the benzodiazepines, Xanax is the most commonly misused and abused.

The number of individuals needing medical attention as a result of Xanax abuse doubled between 2005 and 2011 compared to previous periods of record. Because of its short half-life and very potent effects, Xanax can be an easily abused drug.

The potentiation of Xanax occurs when an individual abuses Xanax with some other central nervous system depressant drug. These drugs include narcotic pain medications, alcohol, other benzodiazepines, sedatives, and cannabis products.

There are numerous anecdotal reports online that grapefruit juice can potentiate the effects of Xanax; however, research studies have suggested that these reports most likely are the result of placebo effects. However, it should be noted that numerous medications can have untoward reactions when taken with grapefruit juice even though it does not appear that Xanax is one of these. Individuals who abuse Xanax and other central nervous system depressants and also consume grapefruit juice in an attempt to potentiate the effects of Xanax may be placing themselves at risk for problematic interactions.

When using Xanax with other central nervous system depressants, there are different potentiating effects at different doses of each drug. At very low doses, there may be a rather mild stimulation effect, but at higher doses, significant issues with lethargy, sedation, and decreased reflexes will occur.

Given that Xanax is typically eliminated from the body rather quickly when taken alone, an individual using Xanax in conjunction with alcohol or narcotic pain medications would be at an increased risk for an overdose on alcohol or the narcotic rather than an overdose on Xanax. For instance, NIDA reports that over 30% of opiate overdoses also involve abuse of benzodiazepines like Xanax.

Any individual who habitually combines Xanax with some other central nervous system depressant to potentiate the effects of these drugs is misusing the drugs and moving toward a formal diagnosis of a substance use disorder.

There are several signs that a substance abuse issue may be present.

Ready to get started?
We're available 24/7 to answer questions and help you make decisions about starting recovery.
Get Help & ResourcesLearn aboutaddiction recovery at River Oaks.