Signs of a Xanax Overdose 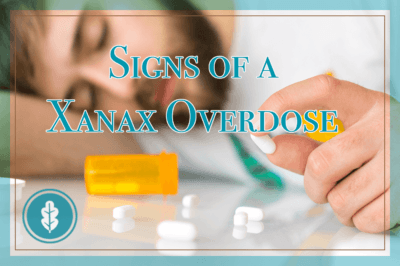 Xanax is the brand name of alprazolam, a popular benzodiazepine used to treat anxiety conditions, including generalized anxiety disorder, anxiety associated with depression, and panic disorder. It is sometimes also prescribed to treat other depression symptoms. The medication is short-acting, meaning it rapidly affects the brain but is also quickly metabolized out of the body. This means it can become a target for substance abuse because of the rapid onset of effects. Abuse of Xanax may lead to an overdose.

Additionally, a person may take Xanax in combination with other drugs – most commonly, alcohol or opioid painkillers. Benzodiazepines like Xanax notoriously enhance the effects and dangerous side effects of other CNS depressants; however, because Xanax is widely prescribed – in 2011, it was the 11th most prescribed medication – a person may take the medicine according to their doctor’s recommendation and not know that mixing it with alcohol or prescription painkillers can be deadly.

If a person takes a lot of Xanax, or mixes Xanax with other drugs, they may experience an overdose.

When a person suffers from a drug overdose, whether it is from too much Xanax or the drug is mixed with other drugs, it is extremely important to call 911. Emergency medical attention is the only way the person will survive.

How Dangerous Is Xanax?

One report found that in 2011, Xanax was responsible for:

Alprazolam is one of the most cited drugs on death certificates, according to the National Vital Statistics Report (NVSR), released by the Centers for Disease Control and Prevention (CDC). Between 2010 and 2014, Xanax by itself was involved in 19,418 overdose deaths; although it was rarely the primary drug of abuse, Xanax is very toxic, often abused, and can be deadly.

An older study from 2004, published in the British Journal of Clinical Pharmacology, found that Xanax was more toxic than other benzodiazepines. Researchers examined a database of deliberate self-poisonings involving benzodiazepines; of 2,063 admissions to the hospital, only 131 were alprazolam alone, but the median length of stay in the hospital was 19 hours, which was 1.27 times longer than with the other benzodiazepines. People who took too much Xanax were also over twice as likely to be admitted to the intensive care unit. Among those who overdosed on Xanax, 14 percent required flumazenil to reverse the overdose, and 16 percent were ventilated – substantially higher rates than with the other benzodiazepines in the study.

Mixing Xanax with Alcohol or Opioids

Prescribing information for Xanax states that the benzodiazepine should not be mixed with alcohol or illegal drugs. Xanax can increase sedation, which can cause a person to stop breathing; it also increases the risk of overdose on several drugs, both stimulants and depressants. CNS depressants, including alcohol, significantly increase the risk of experiencing an overdose. In the NVSR, alprazolam was found in overdose deaths in combination with two or more other intoxicating, dangerous drugs.

According to the CDC report, Xanax is found in combination with other drugs in overdoses, including:

Of 23,000 prescription drug overdose deaths reported by the CDC in 2013, 31 percent involved a benzodiazepine, like Valium or Xanax.

People may accidentally mix their prescriptions or mix alcohol with prescription medications, but there is also a significant risk among people who purchase drugs illegally. Fake Xanax led to some overdose deaths in 2015 because illicit versions of drugs may not be the original prescription medication at all; the formula may be cut with other drugs, most often fentanyl, or it could be an entirely different drug altogether.

Because benzodiazepines, especially Xanax, can quickly lead to physical dependence, it is important to follow a doctor’s prescription instructions and avoid mixing the medication with other intoxicating substances. People who have been abusing Xanax should seek help for addiction or physical dependence. Anyone who purchases Xanax illicitly for nonmedical purposes needs help to overcome substance abuse.

Abuse of Xanax can lead to overdose, long-term physical harm, and death. Fortunately, there are many rehabilitation programs available to help those struggling with Xanax addiction.

benzodiazepinesoverdoseprescriptionxanax
Ready to get started?
We're available 24/7 to answer questions and help you make decisions about starting recovery.
Get Help & ResourcesLearn aboutaddiction recovery at River Oaks.