Both substance abuse disorders and depression are mental illnesses that can disrupt significantly worsen overall quality of life. Substance addiction is the compulsive and uncontrollable craving for, then seeking of, addictive or dangerous substances. These substances can include alcohol, cocaine, heroin, or tobacco. Clinical depression is a consistent feeling of sadness, worthlessness, and/or hopelessness that can last for days or weeks. When this condition lasts for two weeks or more, it can be categorized as major depression. Both addiction and depression involve dopamine receptors in the brain, which are tied into the risk/reward system.

Statistically, depression and substance abuse are closely linked. This is called co-occurrence, dual diagnosis, or comorbidity.

Who Is at Risk of Co-Occurring Depression and Substance Abuse? 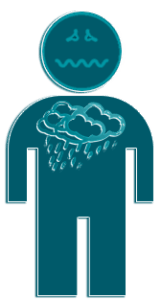 People abusing drugs are more likely to develop depression or other mental illnesses due to chemical changes in the brain. So people who develop an addiction – which is itself a mental illness – are more likely to develop co-occurring mental illnesses in the wake of brain structure changes. When substance abuse starts early in life – during adolescence, for example – brain structure changes occur more easily because the organ is still developing. This can lead to problems with cognition as well as mood or an anxiety disorder, such as depression, later in life.

People with depression more likely to self-medicate, thus leading to substance abuse. This can be especially true if depression has not been diagnosed, if the person is not receiving treatment for depression, or if the person is off needed medication. Although addictive substances like alcohol or cocaine can create temporary euphoria, which can feel like the depression is lifting, once the chemical begins to leave the body, the reduced dopamine is more likely to make the individual feel worse. Sometimes, this is referred to as withdrawal depression.

Some addictive substances are more commonly abused by people who also struggle with depression. Here are a few of those substances:

For people who struggle with either condition, depression or substance abuse, getting help is important. It is even more important for people struggling with a dual diagnosis of both disorders to get help, because depression and substance abuse can feed into each other.

Fortunately, co-occurring treatment is an option. It is important to speak with a doctor or therapist about combined treatment options, and choose the best option for your specific case. In the past, treatment would sometimes attempt to treat one condition first before addressing the other, but research shows that simultaneous treatment for both disorders is most effective.

For substance addictions, detox is often the first step in the treatment process. Replacement medications, like buprenorphine or Suboxone, can ease opioid withdrawal; benzodiazepines work well to ease symptoms of alcohol withdrawal; and bupropion, the active ingredient in antidepressants like Wellbutrin, works well to ease people who are addicted to nicotine off smoking. Once the individual has detoxed from the addictive substance, behavioral therapy, in combination with mood-stabilizing medications if needed, has been the most effective treatment for both substance abuse disorders and mental illnesses. Individual and group therapy can help the person discover underlying causes of the addiction, which can lead to better treatment of depression or other mental health conditions.

Oftentimes, SSRIs or serotonin selective reuptake inhibitors are used to treat depression. Antidepressants tend to be more helpful in treating depression if this condition was the cause of substance abuse, and not the other way around, but they can still be an effective way to balance out a person’s mood while they work on overcoming addiction. In some cases, a person whose depression was caused by their substance abuse will discover that, once they overcome their addiction, they do not experience depression anymore.

Regardless of whether depression led to substance abuse, or the other way around, getting appropriate, combined treatment for both conditions is very important. This helps the individual better understand their triggers for cravings or addictive substances, and maintain sobriety in the long-term. Most health insurance plans cover both mental health and substance abuse treatment.

River Oaks, one of American Addiction Centers’ Florida rehab centers, is ready to help you overcome addiction and find long-term recovery. Call us today at to learn more about our addiction treatment options near you.

Prefer getting help via text?
We're available 24/7 via text message. Signup below for access to our team when its convenient for you!
and many more...
✕
Instantly Check Your Insurance Coverage
Your information is safe & secure
At River Oaks, we accept most types of private (non-government) insurance and offer a variety of payment options.
You can quickly and privately check your insurance benefits to see if you're covered for addiction treatment services. We’ll be able to tell you if your provider is in network with River Oaks Treatment Center and all American Addiction Centers locations.
This means your treatment may be FREE1 depending on your policy, copay, and deductible.
Your Next StepsRecovery can start today. We are here 24/7.