The Connection between Anxiety and Substance Abuse 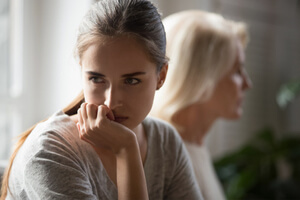 There are many different kinds of anxiety disorders, and any can co-occur with substance use disorders.  Social anxiety disorder, post-traumatic stress disorder (PTSD), and panic disorder are a few of the anxiety conditions with a strong correlation to addiction.

Social anxiety disorder involves anxiety triggered by social situations. People who suffer from this disorder experience significant anxiety and self-consciousness when in situations where others may judge them. Symptoms may occur only in specific situations, such as when performing in front of a crowd, or they may happen every day, such as when interacting with strangers or using the telephone.

Post-traumatic stress disorder, commonly referred to as PTSD, is an anxiety disorder that results from experiencing or witnessing a traumatic event. People with this disorder experience flashbacks, during which they feel as if they are re-experiencing the traumatic event, as well as nightmares, severe anxiety, and uncontrollable thoughts about the trauma. PTSD can result from a single traumatic event, like a car accident, or trauma that is sustained over a period of time, such as being in a war zone for several months. According to the Department of Veterans Affairs, at least 2 out of 10 veterans with PTSD also have a substance use disorder. Both alcohol and drug use are common among those with PTSD.

Most people experience one or two panic attacks at some point in their lives, but people with panic disorder experience frequent panic attacks. This disorder is associated with an individual experiencing sudden panic attacks with no apparent cause, and is another disorder that commonly co-occurs with substance use disorders.

A panic attack is a period of sudden and intense anxiety when there is no real danger present. The person may feel as if they are having a heart attack or dying, or feel a strong sense of dread and uncontrollable anxiety. This can lead to agoraphobia (a fear of leaving one’s home).

What Causes Anxiety and Substance Abuse?

There is a complex interplay between addiction and mental health disorders, but one does not necessarily cause the other. An attempt to self-medicate anxiety disorders is a common contributing factor to the development of substance use problems, but other factors can also be at play.

According to NIDA, some genetic factors may lead to a predisposition to both substance use disorders and anxiety. Some of these genes make an adolescent more prone to substance misuse and conduct disorder, which can lead to drug problems and anxiety later in life. Additionally, drug dependence and anxiety both involve similar areas of the brain, particularly the production and regulation of the chemical dopamine. This may allow anxiety to influence drug use, and drug use to influence anxiety.

Other factors that can contribute to the development of anxiety disorders include:

Factors that can contribute to substance use disorders include:

In some cases, the link between anxiety and substance use may stem from adolescence. The brain goes through significant changes throughout an individual’s adolescent years, and many different factors can influence brain development during this time. Using drugs as a teen significantly increases the risk of developing a substance use disorder later in life.

The presence of an anxiety disorder can complicate recovery from substance abuse by triggering stress that can lead to relapse. It can be difficult to stay sober while also trying to manage symptoms of an anxiety disorder. It can also be difficult to successfully manage overwhelming anxiety while trying to recover from substance dependence or abuse. Therefore, it’s highly recommend that individuals living with dual diagnosis disorders receive integrated treatment approaches that address mental health and substance use disorders simultaneously.

Integrated treatment approaches involve the use of evidence-based treatments that can include a combination of medication, therapy, and alternative holistic practices such as yoga or mindfulness.

Pharmacotherapy. Pharmacotherapy is a treatment with medication and is an effective treatments for both anxiety disorders and substance use disorders. According to a study from Psychiatric Times, a few medications have shown efficacy in treating both substance abuse and anxiety.

Selective serotonin reuptake inhibitors (SSRIs), which commonly treat both mood disorders and anxiety disorders, may also lower rates of substance abuse for some people. Some medications both lower anxiety and reduce drug or alcohol cravings. Others only lower anxiety, which can help some people avoid substance abuse by removing a common trigger for drug or alcohol use.

Talk therapy. Therapy for those with anxiety disorders is generally tailored to individual needs in order to be effective. For instance, the same study from Psychiatric Times  found that women with social anxiety disorder did not do as well in traditional 12-Step substance abuse recovery groups as those without social anxiety. Individual therapy may be more effective for these individuals.

Therapy to treat anxiety also needs to carefully avoid triggering a relapse of substance use. Exposure therapy, which is commonly used to treat anxiety and involves exposing the individual to the feared situation, may not be appropriate for this population, because the stress of exposure to an anxiety trigger could lead the individual to self-medicate with drugs or alcohol.

If you’re struggling with co-occurring anxiety and addiction, or have a loved one that is, there is effective treatment that can help you manage mental health and substance use disorder symptoms. At our inpatient rehab in Tampa Bay, we use proven addiction-focused healthcare to  individuals find recovery from co-occurring disorders.

Call our caring and compassionate admissions navigators today at to learn more about our different levels of addiction treatment can help you get on the road to recovery. They can also answer your questions about what to expect in inpatient treatment, tell you more about our expert addiction specialists, and give you information about your options for paying for rehab — including using your insurance for addiction treatment.

Prefer getting help via text?
We're available 24/7 via text message. Signup below for access to our team when its convenient for you!
and many more...
Your Next StepsRecovery can start today. We are here 24/7.