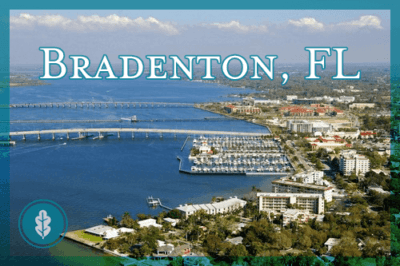 Florida is under the public spotlight for things other than its beautiful beaches and diverse culture recently. The Sunshine State recorded the most drug overdose fatalities in the country in 2016 with 5,167 deaths, UPI publishes. Overdose deaths have been rising in recent years, as the Centers for Disease Control and Prevention (CDC) recognized Florida as having one of the most significant spikes in overdose deaths in the United States between 2014 and 2015, at 22.7 percent.

Opioid drugs seem to be driving these exponentially high numbers. Bradenton, in Manatee County, has been hit especially hard by the opioid epidemic. The Bradenton Herald reports that Manatee County recorded the highest number of overdose deaths involving heroin, fentanyl, cocaine, and morphine per capita of any Florida county in 2015. Manatee County was actually the only county in Florida to have a cocaine overdose death rate of more than 25 people per 100,000 population. The rates of suicide, adults diagnosed with a depressive disorder, many types of violent crime, and alcohol-related motor vehicle death and injury are also all higher in Manatee County (based on 2014 numbers) than state averages, as the 2015 Community Health Assessment (CHA) publishes.

Struggle with Opioids in Bradenton 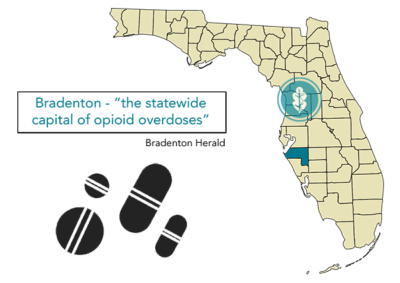 Prior to the reformulation of OxyContin (oxycodone) in 2010 and the law enforcement crackdown on prescription drug diversion and “doctor shopping,” Florida and Manatee County were home to hundreds of “pill mills,” or pain clinics, where people could walk out with prescription opioid drugs without a real medical need for these potentially dangerous and highly addictive substances. Deaths from prescription opioids, and treatment admissions to specialized addiction treatment facilities citing these drugs as the primary substance of abuse, skyrocketed in Florida, reaching a peak in 2010, the Florida Department of Health (DOH) reports. Local and federal law enforcement efforts focused on curbing this dangerous trend, and over the next five years, they were largely successful.

Individuals struggling with opioid addiction may have been turning to other, more easily obtainable opioids like heroin. The Florida DOH reports that as prescription opioid overdoses and treatment admissions went down, heroin treatment admissions and overdose deaths went up. In 2016, the Bradenton Herald deemed Bradenton the statewide capital of opioid overdoses, a large number of which were due to heroin, fentanyl, and carfentanil. Fentanyl and carfentanil are synthetic opioids that are between 50 and 100 times more potent than heroin respectively, and they can be manufactured illicitly in clandestine labs. Oftentimes, fentanyl may be passed off as heroin or used to “stretch” the product. Carfentanil is largely used as a elephant tranquilizer and can be deadly in very miniscule amounts. The illicit drug cocaine is responsible for a large number of overdose deaths in Bradenton and Manatee County as well. The Bradenton Patch publishes that many of the recorded overdose deaths involve a combination of several different drugs.

There are many efforts throughout Florida to increase substance abuse prevention measures and reduce substance abuse. The Florida Partnership for Success (FPS), a grant program, provides funding to enhance state and community efforts to prevent and stem the progression of substance abuse and addiction.

Mental health and substance abuse treatment services in Bradenton, Manatee County, and Florida in general are managed by the Florida Department of Children and Families (DCF) through the Substance Abuse and Mental Health (SAMH) Services Program. Mental health services in Florida are privatized, and public funds are primarily contracted through local nonprofit Community Mental Health Centers and Mental Health Program Offices. The local provider for Bradenton and Manatee County is the Central Florida Behavioral Health Network.

Community-based providers that are licensed through the state provide public and state regulated treatment services. The Florida DCF provides a list of local links for crisis services and resources for Floridians seeking care. The Behavioral Health Treatment Services Locator hosted by the Substance Abuse and Mental Health Services Administration (SAMHSA) also can be a helpful tool to direct people to local treatment options.
Behavioral health treatment services in Florida may include:

There are numerous Prevention Coalitions throughout the state of Florida that provide community-based resources, education, and preventative measures to improve the health and wellness of the localities they serve. The state-recognized substance abuse prevention coalition for Manatee County is Drug Free Manatee, which provides numerous local resources for residents. Educational and prevention resources are also provided by the Community Health Improvement Partnership (CHIP), which serves Manatee County and also Sarasota, DeSota, and Charlotte counties.The statewide tobacco use prevention and education program, Tobacco-Free Florida, highlights the hazards of tobacco use to reduce and minimize it within Florida communities. Suicide prevention and crisis resources are provided through the Statewide Office for Suicide Prevention. Transitional services are provided by Certified Recovery Residences. Peer-based recovery services can include 12-Step meetings like those offered by Alcoholics Anonymous (AA) and Narcotics Anonymous (NA).

In Florida, a loved one can petition to have a person involuntarily committed to treatment if they present a danger to themselves under the Baker Act, or if they are impaired by drugs or alcohol under the Marchman Act. Florida also has several drug courts in operation to get people arrested on nonviolent and drug-related charges into treatment programs instead of sending them to prison. Many times, upon completion of a drug court program, individuals may see their charges dropped or sentences reduced.

The Network for Public Health Law explains that Florida also has laws in place to protect first responders and bystanders who report an overdose or who use the opioid antagonist drug Narcan (naloxone) to save a life. The 911 Good Samaritan Law protects individuals from drug-related charges when reporting an overdose while the Emergency Treatment and Recovery Act expands access to Narcan and also protects those who use it when attempting to reverse an opioid overdose. Florida’s Opioid State Targeted Response Project also works to address the opioid epidemic within the Sunshine State and take measures to reduce opioid diversion, abuse, addiction, and overdose.