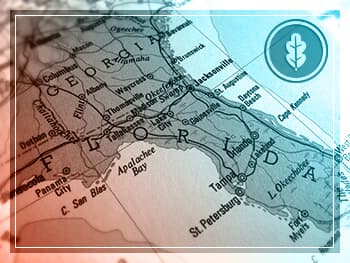 According to the Centers for Disease Control and Prevention, the United States is dealing with a drug addiction and overdose epidemic. Communities throughout the country are struggling to deal with increased rates of use, addiction, and overdose that are damaging families, productivity, and the lives of those who have become addicted to illicit or prescription drugs.

Florida is one state in particular that is dealing with a major drug crisis in multiple regions throughout its boundaries. As a southern border state, Florida is used as a conduit for many types of drugs to enter the rest of the country. As a result, drug trafficking and use are serious problems in Florida. In addition, specific regions and towns throughout the state are struggling with what can be considered an epidemic of drug use.

Florida as a Drug Gateway

According to the US Drug Enforcement Agency’s National Drug Threat Assessment for 2016, Florida is a major gateway for drug traffickers to get illicit drugs into the country. This includes both major drug traffickers and gangs from:

The types of drugs that are generally brought in by these organizations include cocaine, marijuana, and heroin, as well as ecstasy and club drugs. This high level of trafficking through the state is one of the reasons that drug use is so prevalent there. However, there are other reasons as well.

While areas like New England and New York/New Jersey have higher rates of prescription drug abuse, this is still an issue for Florida, compounding the issues that result in high drug use and overdose rates in Florida. While the DEA report demonstrates that prescription drug problems are relatively stable in Florida as compared to the rest of the country, when added to the illicit drug issues, prescription drug abuse contributes to the drug crisis that is boiling over in the state.

Crisis in Florida’s Counties and Towns

Florida is experiencing drug crises of many kinds in different areas of the state. For example, the Tampa Bay Times reports that Pinellas County, where Tampa Bay is located, is one of the five counties in the state with the highest rate of drug-related arrests, while the Sun Sentinel has a report on the opioid overdose epidemic occurring in South Florida, including in Miami.

The National Survey on Drug Abuse and Health has assembled multiple maps that demonstrate the prevalence of substance abuse throughout the US. These maps show the following statistics, demonstrating specific issues in various Florida substate regions:

As mentioned above, South Florida, which is the location of Miami and Miami-Dade Counties, also has high rates of opioid abuse and overdose. The Miami Herald reports that overall heroin overdose deaths in Florida have increased by nearly eight times since 2007, and deaths due to fentanyl abuse have increased by nearly five times in the same period.

Drugs of Abuse in Florida

Overall, Florida has some of the highest rates of death by drug overdose, and the main culprit seems to be cocaine, as reported by the National Drug Threat Assessment for 2016. However, as evidenced by the reports above, heroin and prescription opioid abuse are also major issues throughout the state.

Along with cocaine, heroin, and prescription painkillers, the National Institute on Drug Abuse reports that Miami-Dade and Broward Counties in South Florida also experience high use of:

The Miami Herald article also demonstrates the degree to which overdose of various drugs of abuse has affected the state’s extreme increase in drug overdose deaths and drug abuse problems.

When seeking substance abuse treatment, it is important to make sure that the program in question will provide a customized treatment plan that takes into account and demonstrates experience in:

When these elements are factored into the treatment plan, the individual is more likely to be able to stop drug use and develop the tools and skills needed to maintain recovery for the months and years following treatment. Treatment shouldn’t be a one-size-fits-all experience; it should be customized to the unique needs of each individual.